Another gorgeous day in Paradise .  I could hear Mitzi Gaynor singing “I’m Gonna Wash That Man Right Outa My Hair” as we sailed into Pago Pago early in the morning.  It may not be Bali, but it is definitely a South Pacific Island Paradise —  completely mountainous, with lush, tropical rainforest coming right down to the water.  Beautiful beaches, rock formations, and mist. Okay, the mist was actually humidity, but it made everything look . . . well,  mystical.  Except in the photos, that is; our lenses fogged up instantly when we tried to take pictures.  Thankfully, the situation  improved once we were on shore.  Nevermind that it’s like a sauna; it was wonderful.

My traveling partner, Mary, is an enthusiastic and observant traveler.  Our tastes tend to be similar.  Neither of us is all that keen about the “touristy” attractions.  Our preference is to see a little bit of the environment and the lifestyle, and see it quietly, rather than cover a lot of ground being covered by a lot of other tourists at the same time.  Hence, we had decided not to take advantage of any of the shore tours on offer. They tended to feature things like visits with local families who would perform local customs, which we both felt smacked of tour companies exploiting the locals by turning them into performing circus animals.  I find that embarrassing and degrading.  Anyway, we decided to wing it.

We started with a little sashay through the market stalls that were set up dockside to flog the local commodities. There were a lot of island handcrafts, but also quite a few imported items.   Not surprisingly, the market was packed with Queen Mary 2 passengers, most of whom seemed to be looking for a bargain. I overheard a number of them haggling over prices for trivial items. That strikes me as extremely tacky. The folks there have a very simple lifestyle and a small income. Surely passengers from the QM2 could afford to pay $12 for a shirt without having to haggle the vendor down to $10.

The Dockside Market in Pago Pago

Quite a few of our fellow passengers seemed to think this was the perfect opportunity to wear their dubious purchases from Honolulu. I have to say, they didn’t really blend in all that well. The locals can wear the clothes; the wannabees looked pretty silly. It got worse as the morning progressed. By the time we returned to the market area on our way back to the ship, the number of fellow travelers wearing gaudy hats, and ugly shirts had trebled. It’s a worry.  But I digress.   Our sashay through the market didn’t take too long, so we decided to head off to the Museum.

As we left the market area in search of the Museum (which turned out not to be open), a pleasant looking man, fortyish, I’d say, asked if we wanted a taxi. We looked at each other with identical idea bubbles over our heads.  “How much would it cost to take us around the island?” I asked. Well, you can fill in the rest. The deal was struck; Pulé (pronounced Poo´lee) was happy to take us around, and we were delighted with the opportunity to have a personal tour.  Pulé was a charming host and he did his best to answer our many questions. I think he found coping with the language a bit daunting at times (or was it just coping with two very vocal women?).

His ‘taxi’ was somewhat the worse for wear. At one point he noticed that Mary was trying to take photos through the rather dirty window. He asked if she would like it open, to which she said yes. He stopped the car, got out, and pushed the window down. It had no winding mechanism, and was held in place with a folded up wad of paper, rather like what you use to fix a wonky table leg in a restaurant.  I didn’t realize until later that my window-winding mechanism was crippled as well. I discovered it when I rolled the window halfway up (which was far as it would go) to try to keep out the rain, which was coming in at a pretty good rate. Otherwise, the car was fine (except that I couldn’t get out until someone opened my door from outside). But never mind about all that. What matters is that the island is beautiful.

I’m sorry to have to report that there is a Scottish cafe on this beautiful, isolated tropical island, its golden arches visible from well out in the harbor.  We were horrified to discover later that nearly everyone we spoke with back onboard had visited it.  I don’t know that many hamburgers were actually sold; it seems most of the tourists were there for two things: air conditioning, and clean rest rooms.

The primary source of income in American Samoa is the tuna industry.  Indeed, tuna and stingy passengers off luxury cruise ships support a majority of the 60,000 people who live  there. We passed the two large processing plants (Starkist and Chicken of the Sea) which are located right next to each other, across the harbor from where our ship was docked.  The employees must have been on their (early) lunch break as many were outside lounging about, playing cards, chatting, or just relaxing.  Life in the slow lane looked pretty good.

The island fauna is mainly limited to cats, dogs, and chickens. I saw only one cat, and it was the scariest cat I’ve ever seen. I think it was in a Harry Potter film. Wasn’t there a horror-cat in one of those? There were numerous dogs, all of which were uglier than sin and probably related. But the chooks! Wow!

They were everywhere: along the roadside, in front yards, on the steps of churches and shops — and they were gorgeous. Every so often we would hear a rooster belting out a triumphant announcement of his manhood.

The views at every bend in the very bendy road were stunning.  Palm trees framing intimate little beaches, rocky outcrops, voluptuous green mountains providing a backdrop for the long stretches of white sand across the harbor.  From the other side of the car the view was of incredibly dense foliage and a profusion of flowers in a  rainbow of colors.  Every so often, when the encroaching mountains left a little bit of room, there would be a small settlement of houses and invariably  at least one church.  The population is predominantly Christian, and the influence is apparent.  Many of the churches were quite handsome; the homes, on the other hand, were extremely simple. 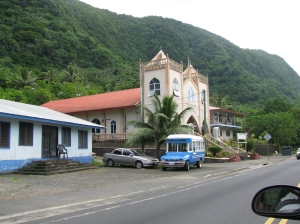 At one point Mary mentioned that she wouldn’t mind a drink, if there were any place where we could get one.  Pulé obliged by stopping at the home of someone he knew where he organized for us to have a coconut.  The lady of the house fetched a coconut out of the frig and Pulé whacked it with a huge machete to knock out the plugs in the holes. He then popped a straw into one of the holes, and voillá! Fresh, cold coconut juice. Very refreshing.   But it did suggest the need for Piña Coladas at the soonest opportunity.

I can’t begin to imagine what would happen if a tsunami struck this idyllic little harbor.  All of the houses and businesses are right down around the waterfront, scarcely above the water level, and the tropical vegetation up the mountains is so dense no one could get through it to flee upwards.  A very scary thought. A cruise ship with nearly 4000 people on board is tsunami enough to disrupt this peaceful haven.

Our arrangement with Pulé was to drive for an hour, and at that point we would turn around and drive back to the ship, making our lovely private tour last two hours.  When the time came, we were sorry to turn around, but that’s what we did.  From time to time we would pass one of the ancient, but very colorful, tour buses, bursting at the seams with our fellow passengers, and we would look at each other and grin.  Neither of us would have traded our morning with any of the tour groups. We didn’t see all of the island, maybe not even much of it, but we tasted it, felt it, and loved it.         MM

2 thoughts on “Pago Pago — Not a Tourism Brochure”