Friends of the one I nearly collided with this morning

This gorgeous little family was photographed elsewhere in Tassie, but it is the sort of little kangaroo that nearly met with disaster in the form of my VW Golf this morning.  S/he was just about to sprint across the road in front of me when S/he did an incredibly fast 180 degree turn, much to my amazement and relief.  It was just up the road from home, and my mind was not on wildlife  at that moment. These little guys aren’t usually out and about in the daytime; at night I would be looking for a critter to leap out of the bushes.   I’m just glad we saw each other. 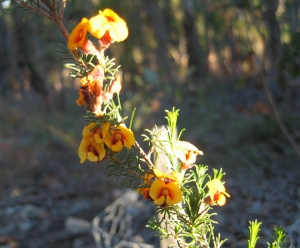 Okay, I’m not going to write a poem, but I think it deserves one.  Not that it is a partcularly spectacular plant on its own, but it is sure brightening up my little patch of the world.  It, and quite a few other species of native plants — mostly in shades of yellow and orange — are creating a beautiful understorey at the moment.  There are a few purples, blues, and whites as well, but the dominant color is yellow.

I’ve just come in from having a walk around in the bush close to the house and the variety of things blooming at the moment is superb.  I tried to take a few photos, but some of the best ones (plants) are tiny and close to the ground.  I’m neither of those things, and when I hunker down to take a close shot, I wobble too much for any camera to cope with.  Besides, there are too many different types to include here.  To make matters worse, my camera informed me in rather blunt terms “Replace the batteries.”  No ambiguity there.   I was delighted to see that one of my favorites — a delicate little carnivorous plant, Drosera auriculata, AKA Sundew —  is in bloom.   I’ll spare you the details of all the things I found.  This little Tetratheca is rather lovely, though . . .

When we first moved to Fossil Cove about ten years ago, Nigel and I immediately became involved in the Australian Plant Society.   Besides becoming acquainted with some very nice people, we got to know about the native plants on our property.  Unfortunately, however, we only got to know them by their ‘proper’ names, so for me to mention any of them is excruciatingly  tedious to anyone who does not wish to speak Botany.  (Besides, I don’t remember them all anymore.)

By the time my camera and I were no longer speaking to each other, I was having trouble walking around without stepping on some of the orchids.  In one area there were numerous tiny Mayfly orchids (there is a picture of one on a post back in August) and a little Gnat orchid, and large numbers of Caladenias.  I also found some Leopard orchids (also pictured in that August post).  I think there are a couple more varieties in bloom, but I’ll have to go back out again, perhaps with my camera’s batteries replaced.

Actually, the ‘ministerial’ in the title refers to the government-type minister, not the church-type.  I mention it only because at the moment the Tasmanian Parliament is getting ready to debate a Death With Dignity bill.  I don’t intend to discuss that bill here, but it did make me think that perhaps we should be considering a Life With Dignity bill.  I reckon life with dignity is a lot harder to pull off than death with dignity.  At least, anyone who knows me knows that I don’t make a very good fist of it.  I support both death with dignity and life with dignity.  I just don’t know how to do it.  By the end of the upcoming parliamentary debate, I expect we in Tasmania will be hankering for Parliament With Dignity.         MM