It’s like a scene from Chicken Run.  The scene where the pie machine explodes, to be exact.    And I’m Mrs. Tweedy.   My kitchen has become a bomb site.  The reason  is that I’ve been madly baking ,  operative word is madly.  A week or so ago  I decided to do a Squidoo lens (http://www.squidoo.com/apple-recipes-Apple-Isle)  on apple recipes, given Tassie is the Apple Isle and all.   I started it gradually, thinking I would just work on it in the background.  Which I did.  For a while.  Then I had it all written and wanted photos to add to each of the recipes.  You guessed it.  I’ve been making the recipes so I could photograph them.   Two to go,  What do you think this does to my (former) waistline?

You can look at the lens at the above web link, but probably not for a couple days.  I won’t be taking a photo of my kitchen.  I swear, there is not one square inch on my kitchen counter that isn’t covered with something that either needs to be put away, thrown away, eaten, or washed.  I kept up for a while, but eventually I was overtaken.  Overcome, to  be accurate. 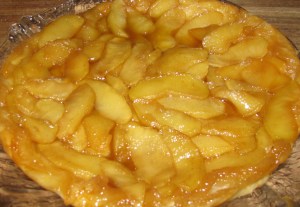 So far I’ve made an apple cake, a tarte tatin, a Dutch Hustle Cake  (which is a yeast type apple cake, very good), and apple turnovers.  I’ve decided not to photograph the Apple Streusel Muffins.   Good as they are, they don’t need a photo, and I don’t need to make another damn apple recipe.  The recipe is there, just not the photo.   But I still have to do the Centerpiece, the Prize Pie, my specialty: my Brown Bag Apple Pie.  If only I could find a brown paper bag. 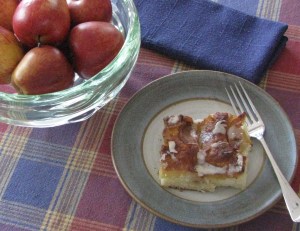 It turns out that this is an excellent time to clean out my freezer.  Surprise! — I need the space.  It’s always the same: you try to do a good thing and it turns on you.  Nevermind.  I’ll be ready for visitors who drop in unexpectedly.  So long as they stay long enough for things to thaw out . . .

Now, if I don’t get downstairs and don my hard hat and rubber gloves, my house is going to be condemned.      MM