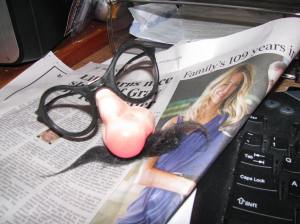 News You May  Have Missed

I’m in the throes of doing some travel-planning at the moment, so I was more than a little excited to see the following  headline in Reuters recently:

This is not a joke.  It seems the International hotel chain, Holiday Inn, is offering a trial  bed-warming service at three of their hotels in Britain.  Apparently, a willing hotel staff member will “dress in an all-in-one fleece sleeper suit before slipping between the sheets.”  This is described as being a bit like having a giant hot water bottle in your bed.  (I hope not, because my experience with hot water bottles is that they leak.) A Holiday Inn spokesman assures us that the bed-warmer would be fully dressed, and would leave the bed before the guest occupied it.  It could not be confirmed, however, whether the ‘warmer’ would shower first, but we’re told that the hair would be covered.  I expect that this trial period will result in some ‘tweaking’ of the service.  Apart from the obvious changes that are likely to be requested,  I should think one might want to have a say as to what after-shave or perfume the ‘warmer’ wears.  Also, I want more details about this all-in-one fleece sleeper suit.  And if the room is ‘double occupancy,’ will there be two warmers, or will the warmer have to roll around a lot?  As I said, some tweaking will no doubt be needed.   I’m looking forward to getting an update before I head off overseas.  Meanwhile, I thought I would just send this little news item off to the relatives and friends who I might be staying with while I’m away.

Prompted by an article (Airline denies plans for obesity surcharge), I just have another quick note regarding travel issues:   The matter of requiring obese travelers who are unable to fit into one seat to purchase a second seat (presumably adjacent to the first one)  has been discussed elsewhere (I’m guessing), so I won’t say too much about that.   What doesn’t ever seem to get a mention is the problem of the long-legged passenger who can’t fit into the seat without resting her/his/my chin on her/his/my knees for the duration of the flight.  Are any of the airlines addressing that one?  I didn’t think so.  It’s about time, don’t you think?

One of the pleasures of travel is getting to visit galleries and museums around the world.  A new exhibit at the National Gallery in London sounds interesting.  “The Hoerengracht”  is described as “a seedy reconstruction of Amsterdam’s Red Light District.”  The installation recreates a street and buildings caked in grime “where lifelike models of scantily-clad women display themselves in windows.”  Critics accuse the National of ‘prostituting itself’ (the critics couldn’t resist the cliché, unfortunately) to contemporary art in order to shock.  I haven’t seen the exhibit, and I don’t know if I will see it, but I can’t imagine it is any more shocking than many of the subjects of great paintings from various historical periods.  Paintings depict life, in all its variety.

“The Hoerengracht” was inspired by the Red Light District in Amsterdam, and apparently was the result of countless trips to the area to gather material and take photographs.  Ed Kienholz, the creator, died at age 66.   Not too surprising.

If the previous item is an example of ‘art imitating life,’ then an exhibition in Jerusalem entitled “Antiquities Theft in Israel” has been a case of life imitating art.  Well, not so much imitating it as pinching it.   The exhibit at the Ashdod Museum featured hundreds of artifacts that had been recovered from the black market, and — you guessed it — several valuable items were snatched by burglars recently, including a silver ring belonging to Alexander the Great.