Our arrival in Helsinki signalled the fast-approaching end to a fabulous cruise.  My mind was busy auditioning various plans for hiding out, so as to not have to get off the ship in Stockholm, but in the end, Common Sense prevailed.  I don’t have all that much experience with Common Sense; it isn’t all that common with me.  But it came as a realization that, as a stowaway, I wouldn’t be able to enjoy the amenities that went with being a guest…  so what would be the point?   Besides, none of my plans had yet  included a strategy for dealing with the bags.

I mentioned in a previous post that this was a Silversea  cruise.  And in my humble, and very spoiled opinion, they are the best.  Not that I’ve been on that many different ones, but I can’t work out how they could be outdone.  One of the chief reasons their cruises work for me is the size of the ships.  They are smaller than most, with less than 400 passengers (AKA guests) on most of their ships.  They have all the amenities of the bigger ships, but the feel and friendliness of a small ship.  It works for me.

And, of course, there’s the butler.  As well as a cabin attendant (the butler doesn’t do cleaning–except in the case of my sunglasses).  What does he do? I hear you ask.  Well, I suppose he just…butles.  He brings me my breakfast at whatever time I require it (silver service, of course); he re-sets my clocks every time we change time zones; he keeps the flowers fresh and the fruit bowl replenished; he ensures that whatever drinks–wine, beer, soft drinks, whatever–are re-stocked; he’ll fetch and carry on request (I would never demand!); and he leaves me little notes wishing me a pleasant evening at the ballet, or little paper tulips that he’s made, or a cut-out of a ballerina with my evening chocolates.  Oh, and he makes sure my clothes are neatly hung and spaced out (in the walk-in closet, thank you very much) so that they don’t develop unsightly wrinkles from being put on the hangers incorrectly.  (I hasten to add: he doesn’t do drawers.)  That’s just a sample of what he does.  I didn’t actually ever press the Butler Button, but I’m sure he would have been there immediately, ready to do whatever little task I needed him to do.

Another thing that makes Silversea good value, in my humble, easily spoiled, opinion is that–unlike Princess, Cunard, etc.–you don’t pay for alcoholic drinks, and tips are not added on to your account later (nor are they expected).  On other cruise ships you can get a big suprise at the end of the voyage when they present your account, including the tips they set and the drinks you’ve had along the way.  If you add that to the up-front cost of those cruises, the Silversea fares don’t seem so expensive.  Okay, so they are expensive, but you can see what you’re getting.

Now, lest you think I was in one of the fancy suites upstairs, let me assure you that I was on the bottom rung of the accommodation ladder.  All cabins are suites; all have marble bathrooms with double vanities and separate showers and full bathtubs; all have walk-in closets, separate sitting rooms; and all but the Vista Suites (which is what I had) have balconies.  Oh, did I mention, they all have butlers.

I think you can see why seven days was just not long enough.

Helsinki and the Lutheran Cathedral

I’m neither an historian nor a geographer, so I’m not going to try to give you a short course on Helsinki.  Or Finland, for that matter.  I can only tell you about the little bit that I saw and learned while there for a few short hours.  (Actually, the hours in Helsinki are the same length as everywhere else, except possibly Manchester, England, which are the longest I’ve ever encountered, but the hours in Helsinki felt short because there weren’t enough of them.)  If you want more info, I’ve included some links at the bottom.  I’ll just say that it is a wonderful city, and one I would like to return to.

Helsinki seemed to me to be a busy port and a bustling city.  Given that the population of Helsinki is just over half a million, I reckon most of them have to be out and amongst it at any one time for it to bustle.  A bit like Hobart, it is hard to go anywhere in Helsinki where you can’t see, or, indeed, splash, water.   Its position in the Gulf of Finland, on the Baltic Sea, together with numerous islands and peninsulas (would that be peninsuli?) give it an extensive coastline.  The salinity of the water in the Baltic Sea, particularly in areas like the Gulf of Finland, is much lower than in other seas.  In fact, it is low enough that the Gulf typically freezes over in winter.

I was fascinated to see that along the coast there was a rug-washing place.  Perhaps there are more than one, but I only saw the one.  Anway, it is simply a place where people bring their rugs to wash, using an eco-friendly soap I’m told.  There are huge racks to dry them on, and a large wringer to wring them out.  Apparently it’s just standard practice, and no one loses their rugs.  Remarkable.

People washing their rugs in Helsinki

By the way, if you are like me, you’ve probably been pronouncing Helsinki Hel SINK i all these years.  Well, STOP it!  It’s pronounced HEL sink i.  It takes a bit of practice, but you’ll get the hang of it.

We went to the central market, including a covered market, for lunch.  Well, not really lunch, but a snack as our guide kept calling it.  It was only a little bite, for which I was very thankful, because half of it was reindeer meat.  The other half featured boiled egg and mashed potato as I recall, but I don’t have much recollection of it as I was too busy trying to swallow Blitzen.

The export of reindeer meat from Finland is apparently one of the fastest growing segments of the Finnish food industry.  Despite its being rather pricey, there seems to be a constant demand for reindeer meat.  It is said to have “the delicious but distinctive taste of game.”   Okay.  The meat is fine-textured and tender, and extremely low in fat content.  I’m sure it’s healthy (for everyone but the reindeer, that is), but it doesn’t suit me.  Sautéed reindeer (Poronkaristys, which is what I had) is the best known fresh reindeer dish, but they also eat reindeer steaks and cold smoked reindeer.   If you want to read more about reindeer meat, check out: Finland: Reindeer.   I’m not going to say anymore about it because I don’t want to think about it anymore.

The other food in the market looked wonderful (the covered market, that is; I didn’t get to wander around the outdoor market).  The Finns are not fresh-food-challenged  by their northern isolation and climate any longer.  I think they were once-upon-a-time.  I suppose that would explain the need to eat reindeer…

Another (more digestible) thing the good folks of  HEL sink i (say it with me) are proud of is Jean Sibelius.  Treat yourself and listen here to the London Philharmonic playing Finlandia. 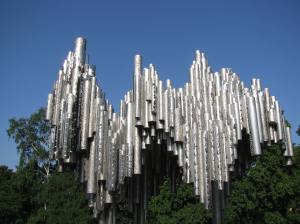 NEWSFLASH:  Newsweek magazine has named Finland the best country in the world!!  I have to say, I’m not surprised.  Check it out!