Okay.  One of you thinks s/he’s being funny.  Har Har.  If the aim was to have a laugh (at me), fine.  If the aim was to nudge me to get on and pick up the story of my travels in the Baltic, well you’ve succeeded.  Sort of.  I still don’t feel ready to deal with St Petersburg.  It was just too…overwhelming.  At least I certainly was whelmed over; maybe you can look at a dome with 40 tons of gold on it and shrug your shoulders, but I couldn’t.

Anyway, back to whomever it was that thinks he’s being funny.  The rest of you won’t have a clue what I’m talking about, so I shall explain.  One of the tours I went on in St. Petersburg was called “The 900 Day Seige of Leningrad.”  The tour consisted of visits to two different museums: the Seige of Leningrad Museum and the Museum of Artillery.  The first was interesting, in a historical sort of way.  Museums are like that.  We’ve all seen lots of films, documentaries, books, maybe even museums about WWII as it happened in England and various European countries.  But there isn’t a lot about WWII as it happened in Russia.   But more about that in a minute.

The second museum, the Artillery Museum, was a whole other enchilada.  I suggest that you click on the following link and carefully and slowly view each and every photo, (be sure to enlarge each one).  This would best be done in a sauna in order to give you as near as possible a re-creation of my visit to the Museum of Artillery, Engineers and Signal Corps.  Yes, indeedy.  They have a lot of guns, tanks, rocket launchers, rockets, missiles, and cannons  there.  See for yourself.  Please do.

Well, I just may have mentioned to a couple of people that if I never see another gun, tank, missile, or cannon for the rest of my life, I will not be disappointed.  So today, in the mail, I received a nice packet from International Masters Publishers.  It contained the news that “We have reserved a special Introductory Package worth up to $94.95  to introduce (me) to the Weapons of War series for the special price of only $9.99… ”

The packet includes, among an array of similar amazing offers, a FREE DVD and BOOK, called “Fighters.”   But wait!  There’s more!  If I reply within 10 days I will also receive a deluxe Aviator Watch worth $24.99.  Grrrrrrr.

Back to The 900 Day Seige of Leningrad

During WWII, the Germans encircled Leningrad on September 8 1941, from which time the city was under seige for a total of 900 days,  until January 27 1944.  In just two months, January and February of 1942, 200,000 people died in Leningrad of cold and starvation.   Life continued on in surprising ways, during the seige.   The treasures of the Hermitage and some of the suburban palaces  were hidden in the basements of the Hermitage and St Isaac’s Cathedral.   Students continued to study, Shostakovich wrote his Seventh “Leningrad” Symphony, which was performed there in Leningrad while the city was still under seige.  At least 641,000 people are said to have died in Leningrad during the Siege (some estimates put this figure closer to 800,000).

I’ll write about the glorious treasures of St. Petersburg another time.  For now I just want to make one or two personal observations.  In contrast to both Tallinn and HEL sink i (say it with me), I didn’t get the sense of buoyancy and optimism I felt among the people in Estonia and Finland.  I have no idea whether there are economic differences accounting for the subdued, downright dreary feel about the  place, or whether it is just the system.

The Sunday I was  there was Naval Day and there was a great deal of ‘festivity’ in the city.  The river was full of various navy ships, including a submarine right near the cruise ship.  The streets and sidewalks and bridges were packed with people swarming into town for the celebrations.  There were long queues of people lining up for tours of some of the ships, and there was a fireworks display at about 10 p.m.  At that point, it wasn’t actually dark, but it wouldn’t get much darker.  This was near the end of the summer period called “white night” when the nights remain light.

St. Petersburg is an amazing place, and I intend to share more of it with you another time, but for now I’ll leave you with a photo of the Museum of Artillery. 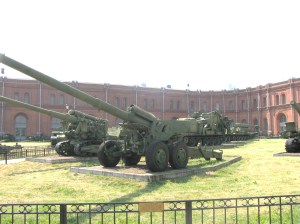 I’d still like to know who the wiseacre is who gave my address to International Masters Publishers.  I have ways of getting even.  This is one woman you never want to arm.       MM

1 thought on “Fodder. Cannon and Otherwise”