“Walk fast and don’t make eye contact”  is good advice in many situations, and it is particularly useful when you are faced with a cranky bull sea lion.  By cranky I mean to suggest that he is inclined to charge.  These guys are big.  They smell bad, too, but that feature diminishes in importance when you’re confronted with a manly show of aggression.  We had been warned repeatedly not to stop and try to take photos in the event that a sea lion (or a seal) came too close, especially if he/she appeared grumpy.  They bite.  And they weigh a lot.  We’d been instructed to keep a minimum distance of five metres between us and any wildlife.  The wildlife, however, didn’t get the memo.  That can work for us sometimes, I’m told.  If a penguin, for example, wants to approach and become chummy, it is perfectly okay for them to come close—even touch us—but the gesture can only work one way.  I’m looking forward to getting to Macquarie Island on Sunday where we will be amidst many (as in squillions) of penguins, seals and elephant seals.  There we can sit amongst them and let them come as close as they wish.  (I’m talking about penguins here.  I don’t really fancy getting chummy with the others.)

But back to today’s excellent adventure.  Some of us had declined the opportunity to spend five and a half hours or so climbing a steep hill (bloody mountain, more like) in favor of a shorter walk.  I should point out that one of the requirements for those going on the ‘long walk’ was a bionic bladder.  And the ability to survive with nothing to eat for up to seven hours (by the time you add a little stint in the mud room before and after the ride to the landing in the Zodiac…).  Anyway, it turned out that my fellow trekkers and I were not short-changed in the excitement department on the short walk.  We may have missed out on the blisters and sunburned noses, but we came back with our own story to tell. 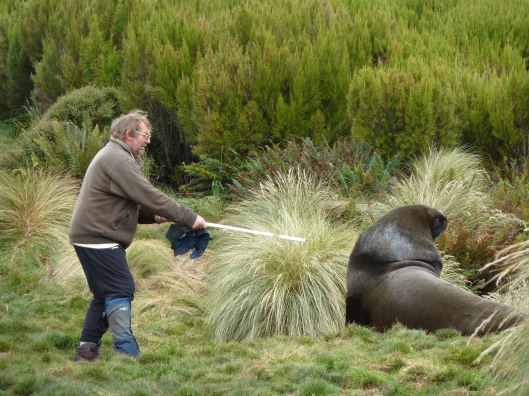 Colin fends off the attack from Grumpy

We encountered a few sea lions flopped down near the path, but none too close, or too menacing (so long as we walked fast and didn’t make eye contact).  But toward the end of the walk we encountered a particularly large and cantankerous bull sea lion.  He was clearly pissed off about something, and we were as good as anything else to vent his spleen on/at?  Damon, our fearless leader and Expedition Team Member, was carrying a lot of hefty camera gear, with massive lenses—all of the Expedition Team Members are similarly well-equipped.  It turns out size does matter.  But as I was saying, Damon had all this camera gear, including a tripod.  He was therefore the natural choice to defend us, putting down the cameras and using the tripod like a sword, holding it horizontally between himself and Grumpy.   This worked for a little while, allowing a few of us to walk-fast-and-not-make-eye-contact behind Damon, as he held off the giant Grumpy.  But as Grumpy became Grumpier, it began to get a bit desperate.  Those of us who had reached safety called in reinforcements, and Colin (a scientist currently working on the island) arrived with a pole to take up the charge.  The story has a happy ending as the rest of our party, including Damon and three brave trekkers, made it to safety.  Not entirely without incident, however, as one desperate lady managed to fall ass-over-apex as she made her dash to safety.   And it wasn’t me.             MM