I’m not usually one to bet on horses, but I made an exception on Australia Day as the Orion headed into the home stretch to Hobart.  How do you celebrate Australia Day on a ship? you might wonder.  Well, it turns out you have a horse race.  We weren’t exactly awash in horseflesh, as you might imagine.  Nevermind.  The  uber-talented Expedition Team, with help from other crew members, saved the day.  We wound up with four feisty competitors.  I take it back; we wound up with three feisty competitors and Glu Factory.   More about him in a moment.

My personal favorite was a frisky young stallion called Won Hung Low  (Duh!), but I bowed to peer pressure and joined a syndicate which ultimately purchased Glue Factory.  I did what most people would do–I followed both my heart and my pocketbook and bet on both of them.

Glue Factory was billed as a loser from the start.  Nevertheless, there were those who thought the race was fixed and cheered him on as if it would help.

Why the long face?

Glue Factory balked at the gate.  He was pathetic.  Won Hung Low had shown some real promise before the race, but failed to deliver.

In the end, the lively filly, Antarctic Queen, won by a lens*, with Won Hung Low a close second.  It’s the last horse race I’m betting on for a while, that’s for sure!

The Derby wasn’t  my only loss on the day.  As with most derbys, there was also a race to be most fashionable.  Particularly in the hat department.  It turns out we didn’t have a dedicated milliner on board.  (And why not? I hear you ask.)  Well, I wondered the same thing.  We did have a milliner of sorts, but he had to split his time between that and being maítre d’hótel. Clinton  did his best, but he could only do so much, so we all pitched in and made our own festive bonnets for the occasion. 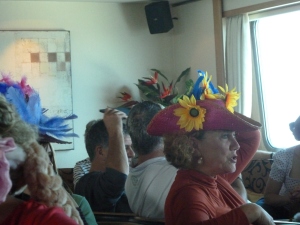 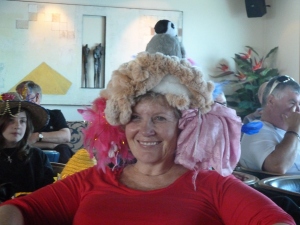 Nor did this one, probably due to the rather tasteless reference to rabbits.

Alas, neither did I, wearing my take on the “Orion Red-Crested Penguin” 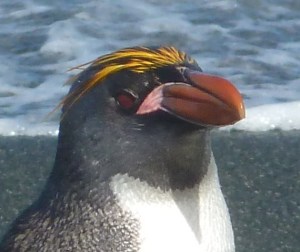