It’s the same old dilemma, faced by researchers and reporters the world over: Do I report my findings in chronological order, by subject matter, significance, or some other variable? In this case I’m just gonna go with the flow.  That means telling it chronologically, for a while at least. Mainly because I get to start out with driving through Tasmania… always a good choice.

I don’t often get to use cruise control in Tasmania–the roads are too hilly and curvy. But I don’t mind; apart from the northern suburbs of Hobart, the drive from Fossil Cove to Wilmot is scenic the whole way.  Even in Paradise, however, familiarity can breed a modicum of… ennui.  My solution was to plug in the iPhone and enjoy some music.  Even a sing-along in the privacy of my own car.  To say my music library is eclectic would be an understatement, so it’s always amusing to set it to ‘shuffle’ and let‘er rip. Sibelius one minute, Roy Orbison the next.  It’s only on long trips that I get through enough of the library to appreciate the extent of the weirdness. But I confess, as much as I love Hoagy Carmichael for giving us Stardust, the truth is, he sings like two cats fighting on a rusty gate.

One of the quirky little features of country Tasmania that I like is the way the small towns and hamlets create an image for themselves.  For example, there’s Railton, the “Town of Topiary.”

A work in progress...

Then there’s Sheffield, the “Town of Murals.”

Some of the murals are very elaborate.

Wilmot has chosen to identify itself as the town of Oddball Mailboxes.

How's this for a handsome mailbox?!

Good for chain letters, I suppose

Very stylish. Looking good with Mt. Roland in the background. 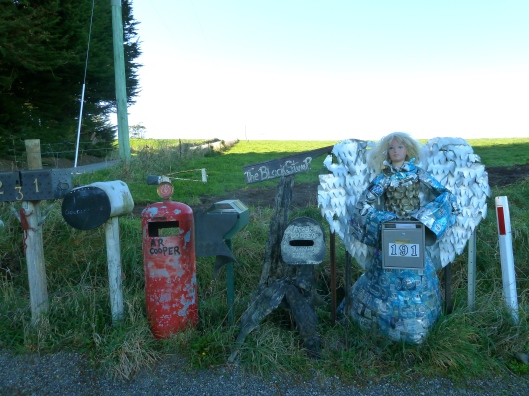 Cows are a popular theme in Wilmot

It's easy to forget this is a mailbox!

And my personal favourite… 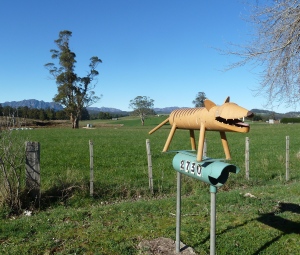 I kept seeing road signs pointing to a place called Nowhere Else.  I haven’t yet taken any of those roads, but I will one of these days.  Naturally it is in Tasmania. . . Nowhere Else.      MM

4 thoughts on “On the Road to Nowhere Else”