The three days in Cape Town were a delight.  It is a surprising city—stunningly beautiful, and unexpectedly peaceful and gentle.  The people are charming. . . so friendly and helpful and, well, happy.  It’s a place I would return to. 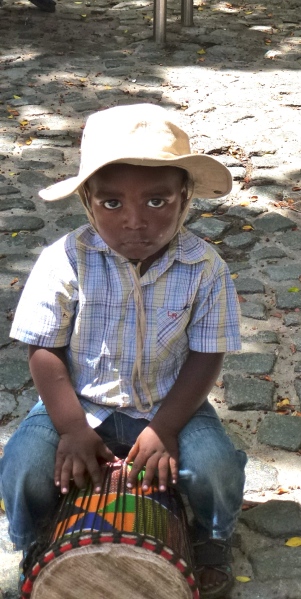 Try not to fall in love with Cape Town when you look at him!

I’ve yearned to visit Cape Town for years.  From the first time I watched a cricket match played there, in fact.  My only disappointment on this visit was that I didn’t get to go to a match.  Rats.  But I did go up onto Table Mountain, and the views were spectacular–every bit as stunning as Rio—as was the sail-in.

The final part of the trip up to the top of Table Mountain was made in a cable car.  A large cable car, which had a revolving floor, giving everyone 360o views.  It meant not touching the window, lest you be shifted off-balance, but once I got the hang of it, it was wonderful.  As wonderful as the views themselves were the rock formations up the side—very close at hand, much of the time. They looked as though they were the product of sculpture rather than erosion.  I felt like a child—me as a child—lying in the grass, looking at shapes in the clouds. My favorites were the smallish outcroppings that looked like the gargoyles on European churches. 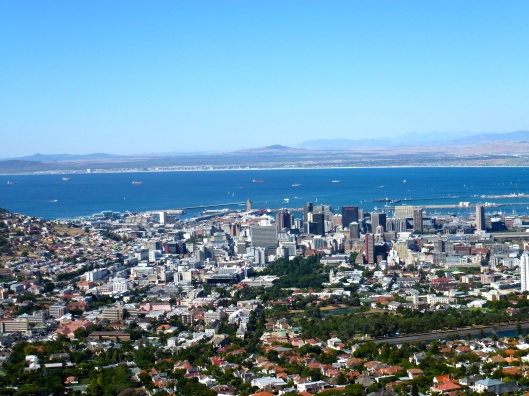 Cable care up the mountain

Following the trip up the mountain, we (a tour group) were taken to another  place for “Sundowners,” where we again had a splendid view overlooking the city and the harbor, and best of all, a front row seat to watch the sunset.  Champagne (and, presumably other drinks—I wouldn’t know) was served, along with an impressive spread of nibbles.  Nibbles—I use the term loosely.  Most of us didn’t need to go to dinner later.   And the sunset didn’t disappoint.

The Guinea Fowl await the sunset with us

And no one is disappointed

The following day I went with friends into town.  The street markets are everywhere, and extensive.  I don’t know how the shops manage to compete! There are numerous street cafes amongst it, with African music—always involving wonderful drums–providing the soundtrack. I never really did figure out the exchange rate between the dollar and the rand.  Most places took either or both.  Literally, both.  I kept using up what rand I had and having to find ATMs to take out more.  In between, I was using a

Market scene in Cape Town--one of many...

combination of USD and rand.  The locals seemed able to do the exchange.  I still have no idea what the correct amount should be.  I heard so many variations on the theme that I just gave up and let them do it.  I never felt ripped off, so even if someone scored a bit extra off me, I don’t mind.  In markets like that I never feel like I need to get a great bargain.  If an error is made, it should be in their favor.  I love my purchases.  I just won’t love having to figure out how to get them home.

Cape Town  is a tidy city, with visual beauty all around.  But it’s not without its quirks.  For example, you will note that in the beach photos, all of the lounges have their backs to the water.  No one goes to the beach to swim—too damn cold—they go for the sun. 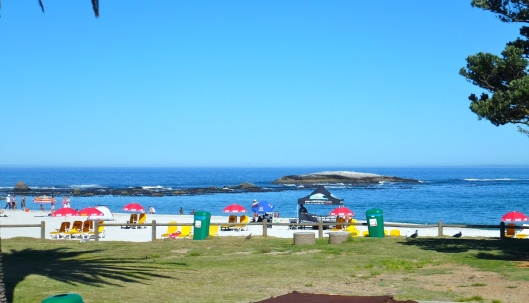 Another of my favorite views of the city is the one showing the Road to Nowhere.  (Not ‘Nowhere Else’—that’s in Tasmania).  This is a freeway that ended abruptly when the funds ran out—around 1974.  The locals don’t seem to be bothered about it—a bit like the crack in the ceiling that you cease to notice after a while…

The Road to Nowhere

The ‘burbs’ around Cape Town are no less beautiful:

With the Twelve Apostles overlooking the town

A lot of new people got on the ship in Cape Town, many more than got off, so the boat is chocka.  It has a different feel about it.  I don’t yet know what that means, except that at the start of every ‘segment’ of the World Cruise, we have a series of Groundhog Events to welcome the new people.  These include: the Captain’s Welcome Cocktail Party, the Solo Travelers Get Acquainted Cocktail Party, a Venetian Society Cocktail Party, and a flurry of invitations to “join” one officer or another at his/her table for dinner.  This, of course, includes a mix of the “old and new” passengers.  The operative word here is “old.”  I dutifully attended the first couple rounds, but have been hiding out in my room just lately.  Best way to keep a lid on the alcohol consumption…         MM

PS:  Next major destination is Durbin, where I shall join a group of other intrepid (yeah, right) travelers on an overnight safari.  Stay tuned!