Warthogs are peculiar creatures.  I got the feeling they ‘knew things.’  Certainly there is a menace about them, and an air of self-importance, but mostly they are just butt-ugly.  It seems to work for them, in a strange kind of way.  Not that lions or cheetahs are put off by their appearance—I expect they find them reasonably tasty—but they do have… attitude.  I have no idea how that might benefit a warthog, but if numbers are any indication, something is certainly giving them an edge.  They were everywhere, usually in small family groups.  And I’m sorry to report that the babies (piglets?) are just as ugly as the adults, though it was kind of cute to see them scurry along behind.  The word “wriggle” always popped into my head.  Even though they were the most ubiquitous animal around, it was difficult to photograph them as they always took off as soon as we appeared.  They were pretty much the only sort of animal that took any notice of us. 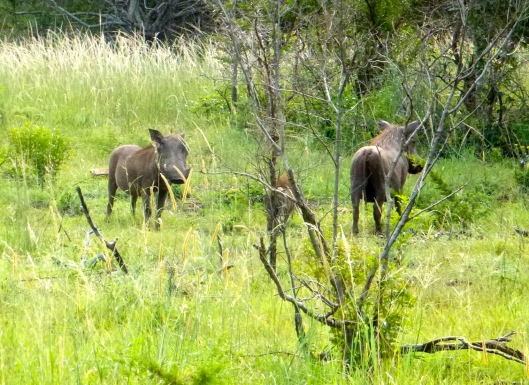 It doesn't matter much which end you look at...

There are other non-beautiful animals, of course.  Lots of them.  But in some cases their lack of millihelens is immaterial. Rhinos are a prime example.  They exude raw Power.  Ugly, yes.  Masterful, absolutely.  The Henry Kissinger of animals. 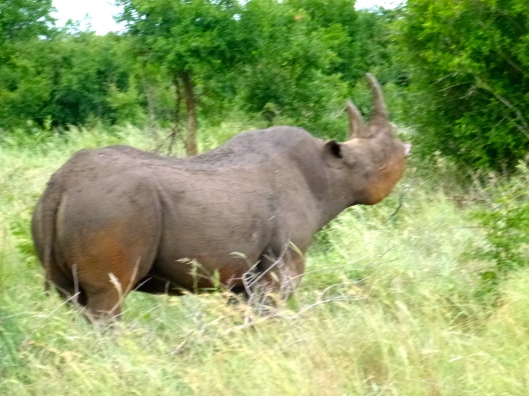 Hippos are different.  Their homeliness tends toward the comical.  I’m not sure why, because they can certainly be dangerous.  Perhaps it’s the eyes and ears above the water—they do look pretty goofy. 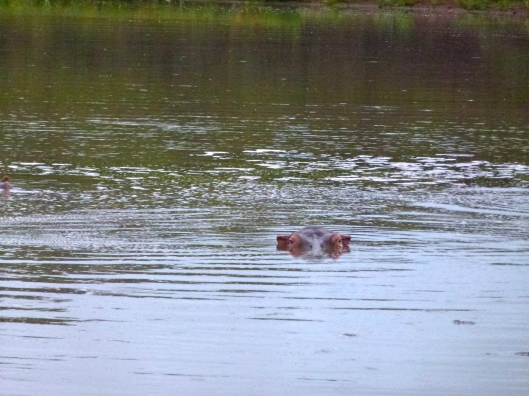 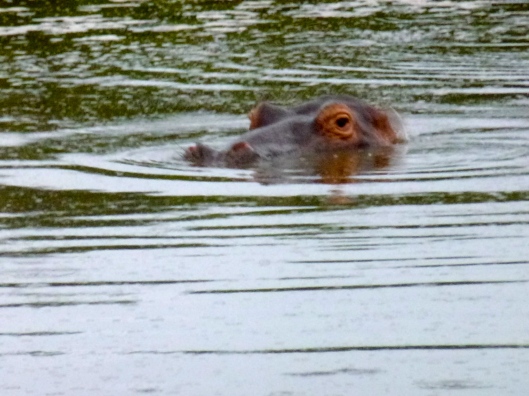 There were two types of antelope in the Phinda Game Reserve: the impala, and the nyala.  The impala and the female nyala are exquisitely graceful and beautiful.  The male nyala is—well—unusual.  And very interesting-looking, with a conspicuous crest down his neck and back and lyre-shaped horns.  He’s dark grey, with bold white spots on his face—on the bridge of his nose—and thin white stripes on his back.  A handsome beast, actually. 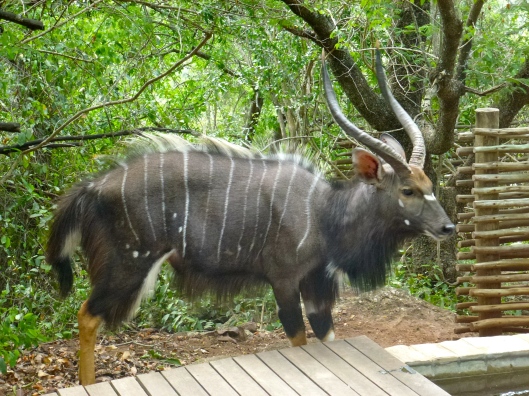 Having a drink in our plunge pool!

The female is reddish-brown, with white stripes across her back. 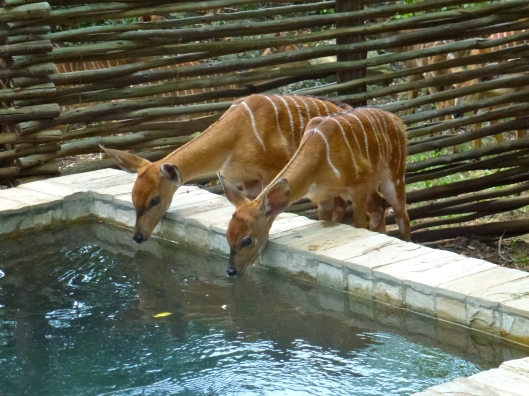 The impala is better-known.   They are the ones with black and white stripes on their rumps, but otherwise plain reddish brown. 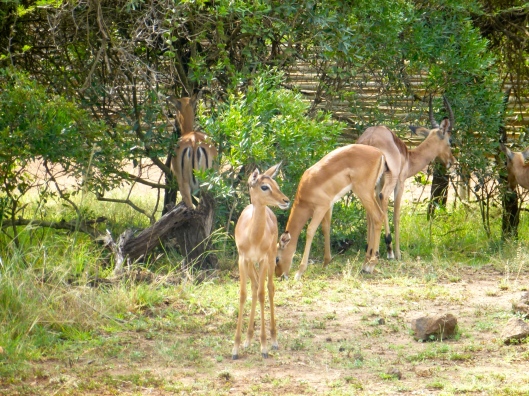 Okay, you caught me; there is a third kind of antelope.  I gnu you would ask.  He’s a large dark antelope with a long head, a beard and mane, and a sloping back. Also called a wildebeest.  It’s just that when talking about the beautiful impala and nyala, it seems a shame to lump them in with the not-so-handsome wildebeest. 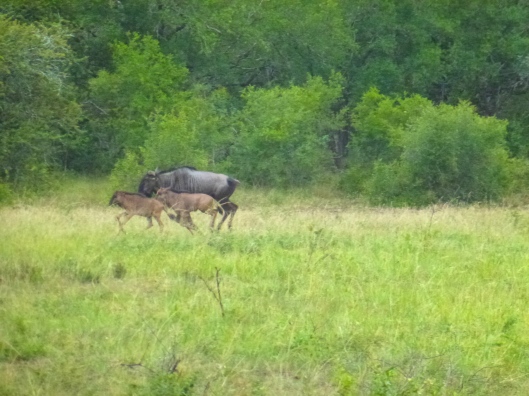 Wildebeests being chased by a young lion--for practice, I think...

I’m not sure what to say about the cape buffalo.  He is at once the epitome of power and menace, and downright silly-looking.  The horns and ears do nothing for his image.  If he weren’t one of “The Big Five” it would be difficult to take him seriously.

Giraffes fascinate me.  I don’t understand how, despite their gangling appearance, they manage to appear graceful.  And in spite of the ridiculous positions nature has forced them to adopt—as when getting a drink of water–they seem to do it with dignity.  It’s exciting to see one emerge from behind a tree. 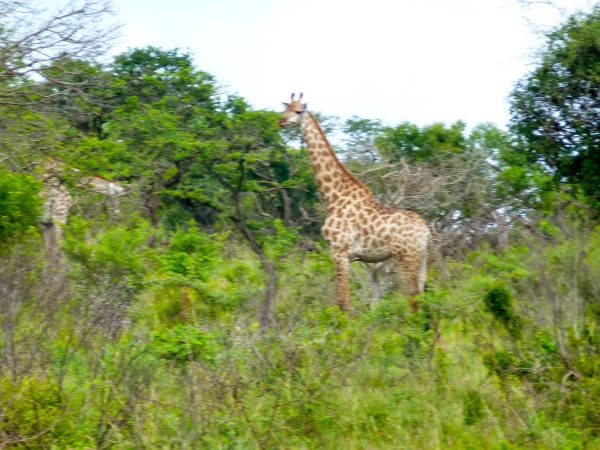 Zebras really do look like very sturdy horses, but apparently they aren’t as sturdy as they look.  I always wondered why they were never domesticated, but it turns out their backs aren’t strong enough to take the weight of a rider or other weight to make them useful as a pack animal.  Another thing I hadn’t known is that at least some of them have secondary brown stripes between the black and white ones. 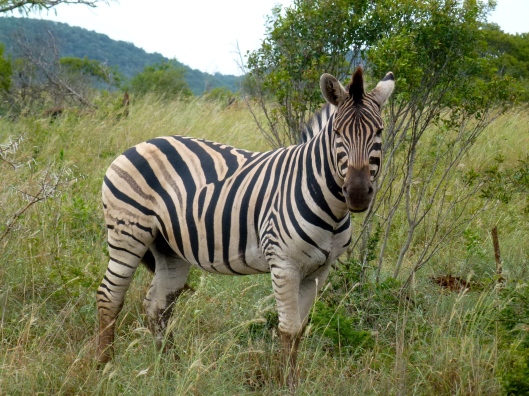 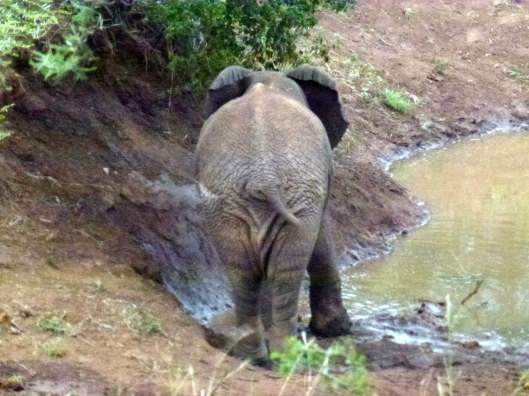 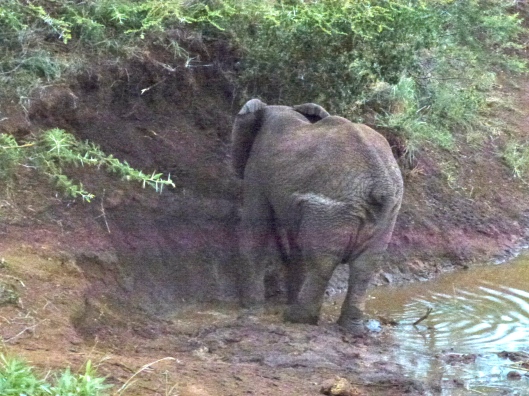 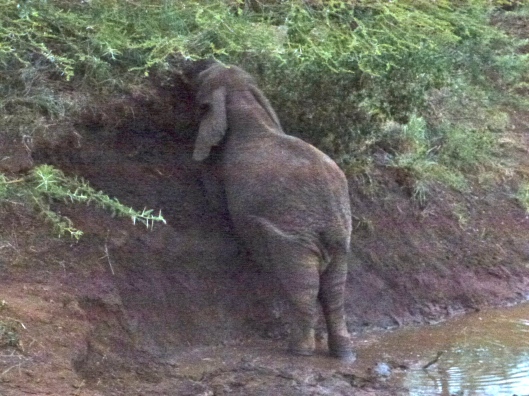 I’m sure you are all waiting to hear about the big cats.  Well, I can report that, although no leopards were spotted (haha), we did spend a long while watching a cheetah and her two cubs eating a freshly killed impala.  The cubs were hoeing into it with gusto while mother lay a short distance away, panting from the chase.  When the cubs had had their fill, and she had cooled down, she, too, went to eat.  Neither she, nor her cubs, showed the slightest interest in us. 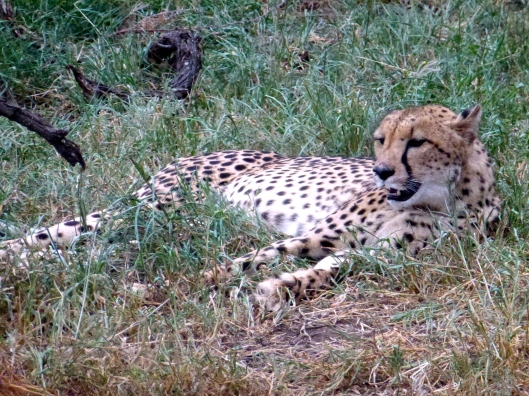 Still hot from the chase 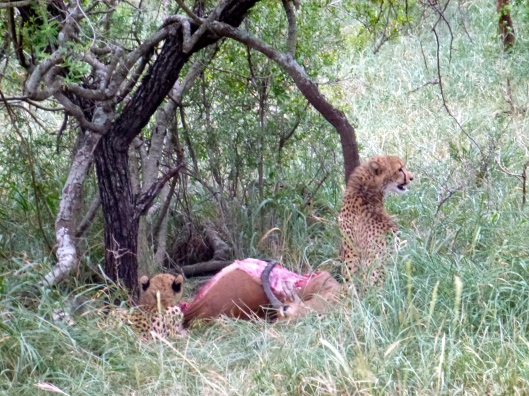 The kids get to eat first, while mom cools down 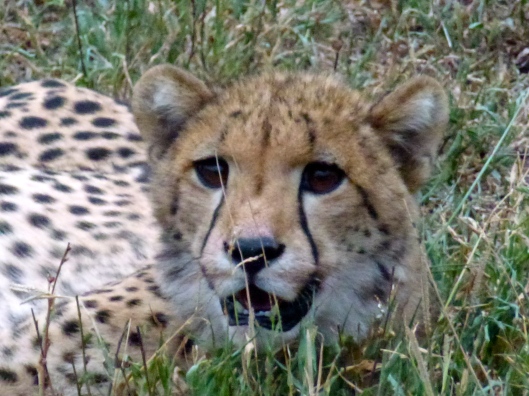 A face even a mother could love!

A similar story unfolded the following day when a lioness and her two cubs feasted on a wildebeest.  It didn’t seem to be such a fresh kill, and by the time we arrived the cubs had taken off to pester a herd of wildebeest (having just eaten, they were no doubt just ‘practicing’).  The lioness spent a lot of time trying to pull the wildebeest further into the bushes so as not to be visible to vultures.  She tugged and pulled, to no avail, until she finally worked out that she would have better luck from another angle.  The deed was eventually done, and she settled down to feast.  Like the cheetah, she took no interest in our presence. 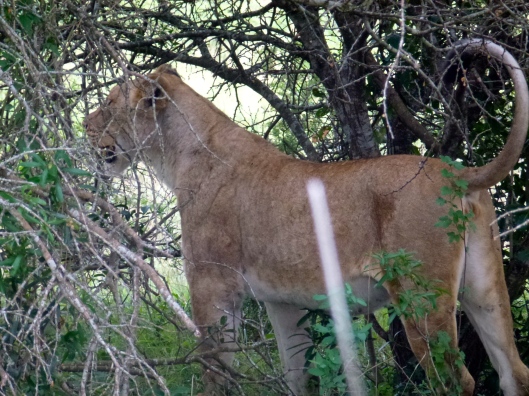 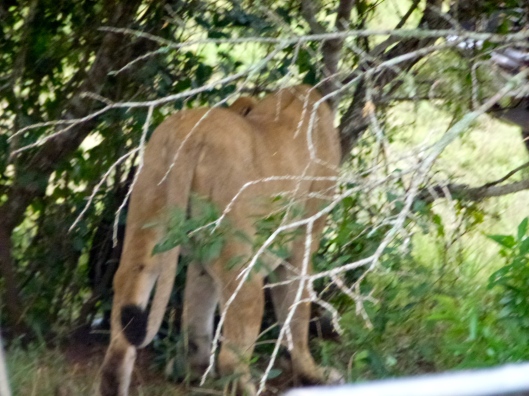 First she has to drag the wildebeest into the thicket so the vultures won't see it.

It was a fascinating lesson in how life is played out in the African bush.  It mostly feels very tranquil and quiet.  But just occasionally one of the predators decides she is hungry.  The most vulnerable animals travel in groups.  The more secure you are, the smaller your group.  Rather like us, I suppose.               MM

2 thoughts on “There Are Warthogs and Wildebeests, And Then There Are Beautiful Animals”