Oh dear, I’m falling behind again.  It’s actually very difficult to be having adventures and writing about them at the same time.  Just as well I never had ambitions to be a journalist.

Actually, I did almost get to report “live from the bunker,” as they say, when we were sailing in Pirate Territory!  Truly!  We had to swing way away from our normal course, which meant that we had to take on more fuel, which in turn delayed our departure from Mauritius, which meant running about 13 hours behind. The Captain called us all together as we entered the area of the Indian Ocean which, along with the Gulf of Aden, the Arabian Sea, and the Red Sea, has been designated by the International Maritime Organization as a high risk area for Piracy.  AND there apparently had been Security Warnings… Our ship had to adopt additional security measures, including a safety drill for the crew, lights out/curtains closed at night, and instructions about where to go in case of an attack.  The Captain added that it is a very low risk for a ship like this as it is much faster than the pirate ships. Even so, Lookouts were posted...

I suppose you can guess the outcome: namely, that we didn’t encounter any pirates, because I’m still here, and there was no Report from the Bunker.  We were ‘under alert’ for about five days.  I must admit, it did add a certain frisson of danger.

I’m actually quite capable of generating a bit of ‘intrigue’—some people would say recklessness—on my own.  Remember, I live in Tasmania, where Danger is usually limited to people driving in the middle of the road.  Anyway, here’s what happened:  When we stopped in Colombo, Sri Lanka I had signed up for an all-day tour to the Elephant Refuge at Pinnewela, which involved a 2 ½ hour train ride (each way) to an elephant orphanage.  Kind of a cool trip, actually.  Except that I slept a good bit of the way there, so I missed seeing much the countryside I had hoped to see.  The train had been specially tarted up for tourists and was kinda cute. 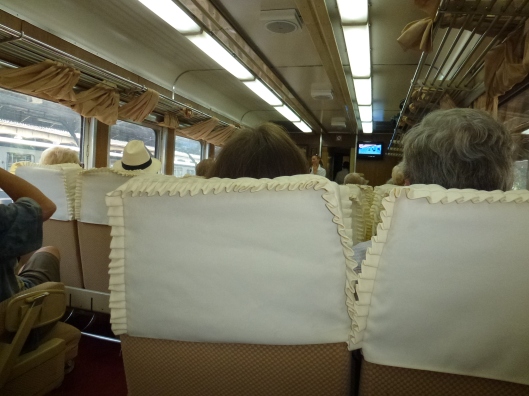 There was quite an extensive marketplace there, plus restaurants and other things.  Anyway, I managed to miss the instructions about what time and where we would re-group for lunch after viewing the elephants on our own. 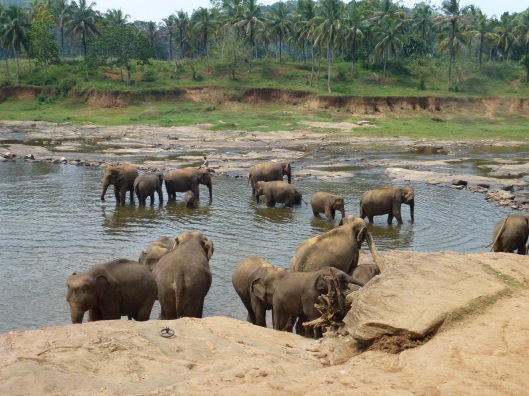 I wasn’t too concerned—being largely an all-white group, we tended to stick out like dogs’ balls amongst the local population.  I hadn’t counted on there being other similar groups arriving behind us.  I hadn’t bothered to think about it, truth be told.  So I had a good look at the beasts in the river, got my photos, started wandering back whence I’d come.  Well, there was a rather nice little jewelry shop (one of the only actual shops, as opposed to stalls), wasn’t there?  That visit took rather longer than I realized.  When I emerged I started to look for familiar faces.  There were plenty of white faces, but not one of them was familiar. 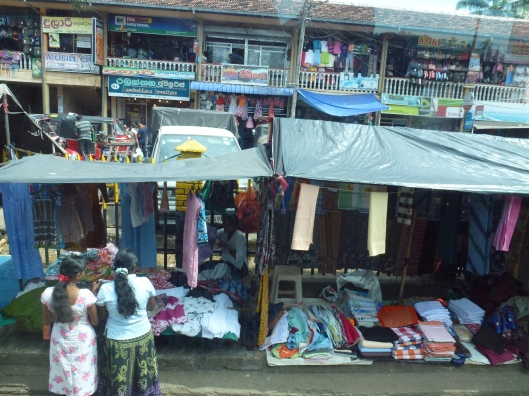 Nevermind.  I started strolling in the direction of the buses.  Shortly, I was joined—make that enjoined—by a young man who assured me that some of my tour-mates were up ahead, visiting the wonderful Herbal Garden.  He would take me there and I could have some Herbal Tea.  Other members of my tour were already enjoying some Herbal Tea.  I should pause here and explain that I was having a bit of a ‘brain fog’ that day.  I wasn’t altogether …attentive.  It happens.  Anyway, I followed this Herbal Tea guy to the Herbal Garden, where he showed me many plants, breaking the stems or crushing the leaves for me to smell, cracking open the pods to release the spicy aromas.  It was nice.  At some point someone brought out a little tray with a cup of Herbal Tea for me.  It was delicious.  He told me what was in it, but I have no idea what that was.  From time to time I thought it was a little odd that there were none of my tour-mates to be seen, but, hey, the Herbal Tea was delicious and it was very interesting to see all of these neat Herbal Plants that could cure so many things.

We went to an open room—only three walls, with the other side being open to the Herbal Garden—where there was a series of long, narrow benches and a little table with an assortment of bottles of various oils and ointments.  My host explained that he was an Her-bal-ist, and he would give me a foot massage to demonstrate the value of the Red Oil (#7on the sheet listing all of the oils and creams).  Well, I have to confess, I am a sucker for a foot massage, so I sat down on the bench and My Herbalist Friend (who seemed never to have stopped talking long enough to catch his breath) removed my sandals and massaged my feet with the magic Red Oil.  “Would you like a head massage?” he asked after he finished with the feet.  “Oh, yes,” I replied enthusiastically, having witnessed the wonders of the Red Oil.  Whereupon he poured about a teaspoon of Green Oil onto the top of my head and began to massage it in, explaining that this is a cure for migraine.  It is also a real downer for the hairdo, but what the heck.

After his success with the foot massage and the head massage, he offered a neck massage, once again with the Magic Red Oil.  How could I refuse an offer like that?  Actually, it turned out to be more of a back massage than a neck massage.  I was invited (perhaps instructed) to lay down (face down) on the two benches he had pushed together, which I did.  Well, obviously my shirt was going to have to come up a ways, otherwise it would just be oil-soaked.  I was a bit startled, I admit, when he very matter-of-factly unhooked my bra.  But how else was he going to be able to massage my back?  Let me reassure you now, he never exceeded his authority.  The The Red Oil was applied only to my back.  Very nice.  But when he told me to roll over, I decided the massage was over.  I quickly sat up (re-hooking the bra before I did) and announced that I was feeling a bit exposed, and thank-you-very-much-where-can-I-buy-some-Red-Oil?  That’s the end of the story, except that, although I had missed out on lunch, I had had a rather nice cup of Herbal Tea, a $10 massage, and am now the proud owner of both a bottle of Red Snake Oil and a bottle of Green Snake Oil, which will come in handy if I ever have a migraine.            MM