Looking for something different to do in Hong Kong, I signed up for a day at the Chinese Cuisine Training Institute.  What a day!  My knowledge of Chinese cuisine–nevermind being able to cook it–was next to nil.  But I like to embrace new experiences, so why not give it a go, I thought.  Good decision.  I had a ball.

We started the day–as all good chefs do–at the market.  Specifically, the wet market.

This is where one buys the meat and fish for the day.  Or half a day.  Our guide was emphatic in pointing out (several times) that freshness was of paramount importance.

It all looked very clean and fresh...

She added that in our country (yours and mine) we weren’t so concerned about that as we bought all our food at the supermarket.  But here, the people shop usually twice a day, for the midday meal and for dinner, so that it will be fresh.  Indeed, so fresh that the chickens and fish were still alive.  You get to pick out which ones you want killed.

The fish were swimming, the crabs were trying to escape…
The array of produce was awesome.  And, yes, there were chicken feet, duck feet, pig heads–the lot
. 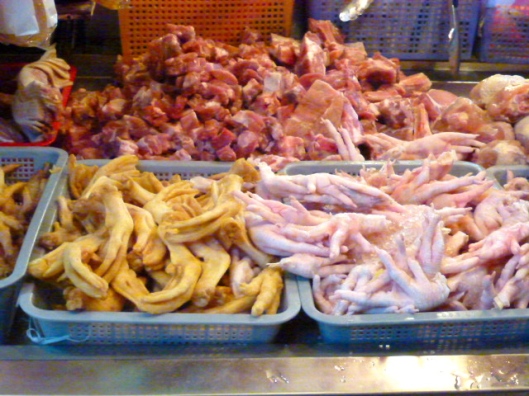 Surprising to me, it wasn’t especially smelly.  It was crowded and noisy, and very colourful, but not too smelly.  I couldn’t stop taking photos–it was such a feast for the eyes.  We had been told that some people–especially the older ones–did not like having their picture taken, so I was careful to keep my camera focussed obviously on the food, not on any person.  Apparently one lady didn’t want her fruit photographed either, as when I walked on after taking a photo I was pelted with something–I don’t know what.  From then on I tried to get permission, even for the food.
I have to say, it all did look wonderfully fresh.  The veggies, too, were gorgeous.

But apparently the young people prefer to go to the supermarkets…much to the chagrin of our guide.  I’m sure she thinks it’s all our fault.
On to the Institute, which I can report is a class act.  Much in Hong Kong is a class act, in all senses of the phrase.  It is fairly new, and very luxurious and modern.  No expense has been spared (by the Government).

View from the Institute

This is the training ground for the important chefs.  Master Chefs.  It was pretty cool!

After a brief tour, we went into the demonstration kitchen, where one of the Master Chefs demonstrated two dishes (Fried Prawns with Sweet and Sour Sauce, and Sauteed Diced Chicken with Garlic, Chilli, Peppers, and Peanuts).  This was certainly very interesting to watch, but it all had to be translated, as he spoke Mandarin.  As is so often the case with interpreters, the Master Chef would explain something elaborately, wild gestures and all, in four or five paragraphs, and the interpreter would say one or two sentences.  I think we may have missed a bit in the translation…

Next, we got to prepare the same two dishes as we had watched  him do.  Most participants ( I think there were nine of us) were in pairs (husband and wife), but I was odd man out so I got to have my own wok.  And my own three sous chefs (students), which would have been really swell if any of them spoke English.  Nevermind.  They were good at hovering, and they had done all the preliminary slicing and dicing, leaving me only the glamourous bits to do–dip and fry, dip and fry.
A word about the woks: Enormous.  I’ve seen smaller hot tubs.  One needs bionic wrists to shake, swirl, and flip those suckers!  Well, I don’t have bionic wrists, so I took advantage of the nice assortment of tools at my disposal for the swirling of oil and stirring of whatever needed stirring.  It was a bit disheartening to be told–also several times–that home kitchens could never achieve the temperatures that they had, so we could never really reproduce what a commercial kitchen could do, only an approximation. (These burners could fire up a hot air balloon.) So we shouldn’t feel bad when our meals didn’t taste like theirs… 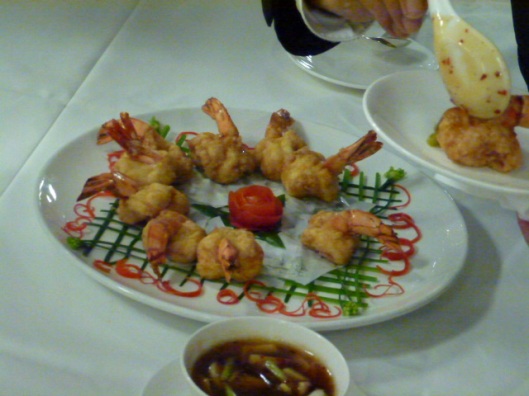 My prawns...after several people had been sampling them.

I should mention one more thing:  The Aprons.  They were so gorgeous I had to buy a couple.  The Master Chefs wear them. 🙂   They were designed specially for the Institute, and the design is based on the Terra Cotta Warriors.

The Apron, based on the Terra Cotta Warriors

The main tip I learned was, the most important thing you need to have when cooking Chinese is a sous chef.  Preferably one who speaks the same language as you.   The funniest thing was, about the time we got back to the ship an hour or so later, I had the strongest desire to go back and do it all over again.        MM

2 thoughts on “Wok This Way”