I’ve learned a new word!  I love it when I can add a new word to my day-to-day vocabulary. And this one is a dandy. I learned it on the Word of the Day gadget on my Google home page.  The word, of course, is fard:  fard \fahrd\ , verb:  1. To apply cosmetics. noun:  1. Facial cosmetics.

How handy is that?  Now, instead of having to ask, “Where is the ladies room, please, I want to powder my nose,” we ladies can simply say “Pardon me, please, I need to fard.” Oh, happy day.

I wrote about this some months ago, and there has been a new development.  I’m not claiming credit for what is happening in The Netherlands, I’m just saying…  In Amsterdam a new cookbook was launched just this past week called The Insect Cookbook.  Unfortunately for those of us who don’t speak Dutch, it has not yet been translated into English, but it is surely only a matter of time.  This new cookbook apparently is replete with recipes to help you boost the protein in your diet through the addition of insects.

There are restaurants around The Netherlands which already are featuring dishes  enhanced with insects.  Indeed, a restaurant in Haarlem recently served a five-course menu of insect dishes.  This month’s special is meat pie sprinkled with nuts, seeds, and worms.  Yum.  A word of caution to those of you who are ready to rush out and get some creepy-crawlies to toss into your next casserole or pie:  apparently the taste of insects does not go well with fish.  But, then, no food is perfect.

Oh, yes.  About the book launch–a specialist insect chef (now that’s gotta be one lonely professional association!) attempted to set a record for cooking the world’s biggest grasshopper pie.   I’m guessing it didn’t have any creme de menthe in it…         MM 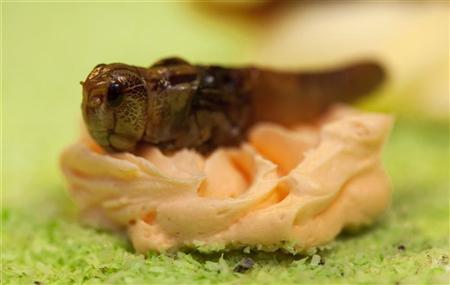 3 thoughts on “Pardon Me While I Fard”