Have you ever noticed how certain  themes can develop in your life when you aren’t looking?   I recently noticed that I was accumulating a little collection of duck tales, so I thought I would share them with you.  What called this to my attention was the appearance of a new sign.   I swim several days a week–have done for the past few years–and near the pool where I go a brace of itinerant ducks wanders the neighborhood, going from house-to-house, making themselves at home, first one place then another. 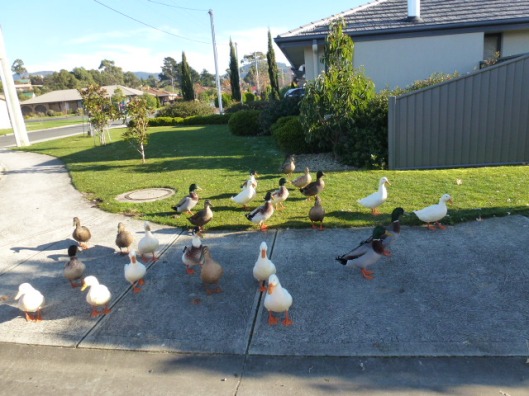 A waddling of ducks
They always put a smile on my dial, and I’ve often thought I’d like to write about them.  Sometimes they’re just sitting around under a tree; sometimes they’re hoovering up the slugs on someone’s lawn, and sometimes they’re marching  across the road, stopping traffic in both directions. I’ve been curious about how the neighborhood residents feel about these ducks, given that ducks are very dirty (poop-wise), and having a large group of them sitting on your front lawn would create quite a mess.  Well, I’ve got an answer, in the form of a duck crossing sign, newly  erected  along the roadside this week: 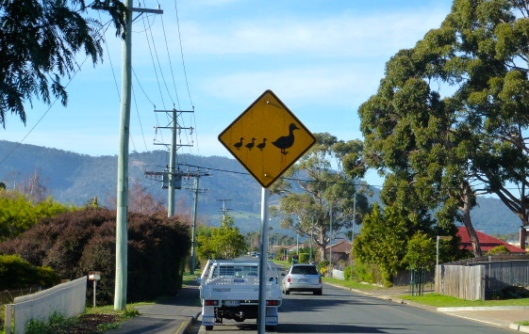 My comment that ducks are very dirty (poop-wise) is based on hearsay rather than on first-hand experience.  They are apparently worse than chooks, which I do have first-hand experience with.  I can’t quite see how they could be worse–I mean,  poop is poop,  and why would ducks poop moroe than chickens?  I don’t know, but what I do know is that years ago, when my son, Randall, and his wife, Anne, moved to a property in the beautiful Huon Valley, they rushed to get some chooks, ducks, geese–the whole Old MacDonald thing.  They loved their geese (cantankerous beasts), they adored their chooks, and still have a bunch of chooks at all times, but the ducks did not last.  Indeed, they were traded for a bag of lemons.

I take it back about not having any experience with ducks.  About eight years ago a big white Muscovy duck decided to squat here.  He seemed to think he could pass for one of the chooks, and be a part of the rather pampered lifestyle that they enjoyed.  Trouble was, they didn’t fancy him all that much.  Nor did we, come to that. We had no idea where he came from, or why he chose us to adopt. Probably had something to do with the abundance of food put out for the chickens and other critters here.  None of the neighbors would claim him, except for one fellow who thought he would make a good sunday dinner.  In the end we took him to a little village about an hour from here where there is a lovely historic bridge over a charming little river which is home to many ducks, both domestic and native varieties.  We felt sure he would find friends there.  And as it is a tourist hotspot, there are always visitors with bags of bread to feed to the ducks. There’s an epilogue to this duck tale.  A few months after we took Ducky to Richmond, our three Adelaide grandchildren came to stay for a couple days.  We took them to Richmond for a little outing, and while we were there we told them about Ducky.  Naturally, they all were keen to find him.  Young Harry, who was about five at the time, came running up excitedly, saying he had found Ducky under a bush, with another duck.  “I think they’re getting married!” he exclaimed.   Lucky duck…

I’m not good at trivia.  Never have been.  I have a lousy memory, and–even worse–I’m a rotten loser.  So I tend to avoid trivia games, which it turns out is difficult on cruise ships, where Team Trivia is very big.  I have been sucked in a few times, and invariably have turned out to be the appendix of the team–serving no useful purpose in being there.  Except One Time.  And it was not a Team thing.  It was an ‘audience warm-up exercise’ at an art auction.  If you answered the question correctly, you would go into the draw for a prize at the end of the auction.  The question was:  “Why was Donald Duck banned in Finland?”   I blurted out “Because he isn’t wearing any pants.”  I have absolutely no idea whether I actually knew that from somewhere, or just thought it made sense.  In any case, I was right, and my name went into the draw for a rather nice limited edition lithograph.  At least I think it is rather nice.  I should add that the lithos given away on subsequent days were awful–pictures I wouldn’t hang in the chook house.  But on the day I won,  the choice was good.  I should add that I already had a couple rather charming antique prints of hummingbirds, so the lithograph I chose was a perfect fit. 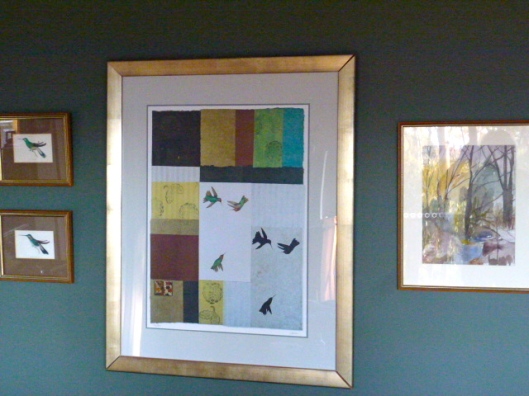 I’ve run out of steam, but before I go, here are a couple of duck-themed photos from my travels.  The first one was taken in 2010, when I was on a narrowboat on a canal in England:

When the lock starts to open, duck!

And more recently, at a market in Hong Kong:

By the way, did you know the most common collective noun for ducks is “a brace of ducks.”  There are numerous others, including:

Here’s a photo off the internet that I couldn’t resist:

A man transports ducks on a motorcycle to a market in Nam Ha province, outside Hanoi May 31, 2012.     REUTERS/Kham
And finally, one cannot write about duck tales — or duck tails– without including that great icon of the Fifties:

–yet another example in the series of things that “just because you can doesn’t mean you should…”
Cheers!          MM