Well I haven’t had so much fun since  Cousin Ethel fell down the well.  Okay, I exaggerate…nothing will ever be that much fun again.  But I’m not exaggerating when I say I had a great afternoon listening to Burglars Dog on Sunday.

I had wandered down to Kettering–about a thirty minute drive down the Channel from where I live–to attend a Sunday afternoon jazz concert, having no idea what to expect. It just seemed like a good thing to do.   Kettering is a lovely little hamlet about 10 kms south of Snug (or 40 kms south of Hobart) on the D’Entrecasteaux Channel, between the estuaries of the Derwent and Huon Rivers.

Kettering is the centre for fishing in the region. It has two major marinas, South Haven Marina and Oyster Cove Marina, as well as many smaller, privately owned jetties. Approximately 400 boats are located in Kettering whether on moorings or in marinas. The Bruny Island Ferry, Mirambeena, runs from Kettering numerous times a day.  Kettering also has a thriving community involved in many artistic pursuits. There are many artists and crafts people living in Kettering and the Southern Channel. 2008 saw a local production of Under Milk Wood, presented as a radio play in the local Community Hall which was very successful. It also was at the centre of the Art Trail an event which included 3 exhibitions and 9 artists’ studios opened to the public. The local Kettering Music Group have been organising 2 or 3 Chamber Music concerts Music concerts and a Jazz concert in July Jazz concert since 2004.    (Ta, ever so, Wikipedia)

So I was up for some Sunday afternoon jazz… whatever form that might be.  It turned out to be some great 30’s  jazz/blues (à la Leon Redbone, and you know how much I love Leon Redbone!)  I realized immediately that this was something I was going to have to share with you, but Alas! I only had my iPhone with me.  Pah!  Not good enough for the job.  So, at the break, I went out to my car and retrieved my iPad, which was (almost) good enough.  Actually, it is pretty good, but I’m pathetic at using it.  I did my best, dear readers, and I will share some of it with you.  But let me set the stage a bit more.

As you know, I live in rural Tasmania.  That’s redundant– it’s enough to say I live in Tasmania–five minutes out of the CBD and you’re in rural Tasmania.  Anyway, as I was about to say… Kettering — Rural Tasmania.  But don’t be deceived by the “rural” moniker.  Many people choose to live here for the beauty and the lifestyle, and it is by no means a cultural backwater.  We have a great tradition of excellent artists, writers, musicians, etc.  But the charm is in its naturalness.  Natural in every sense of the word.  So the day was destined to be full of charm, talent, fun, and friendliness.  What else do you want for a Sunday afternoon? 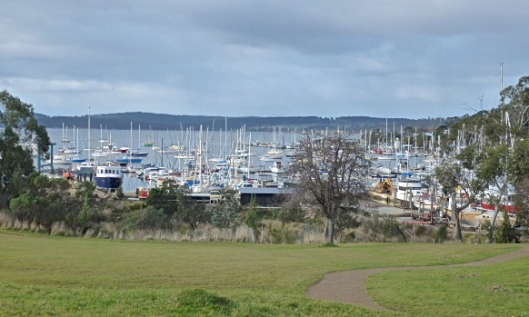 I don’t know a whole lot about Burglars Dog (wish I knew where the name came from) but I do know that it started as a jug band back in 1976 or ’78, depending on who you ask.   In any case, they’ve been around long enough to have a pretty fair idea what they’re doing.  Apparently there was a jug in there somewhere in the early days… but not now. There still is the tea-chest bass, the washboard and other assorted gizmos and drums, a couple banjos, two guitars, a harmonica and a jews harp and various other arcane mouth organs, and a saxophone/clarinet player.

Here’s a short sample of Burglars Dog:  (blame me for the rotten camera-work.  Remember, it was taken with my iPhone.)

And here’s the old classic, Flat Foot Floosy With a Floy, Floy.  Be careful not to get whiplash as I swoosh the camera back and forth between the harmonica player and the saxophonist, trying to capture the exchange between them. Fortunately, that bit of camera madness is only brief.

So there you have it.  A great way to spend a Sunday afternoon anywhere, but in Tasmania it’s even a beautiful drive to get there.  That’s Life in the Slow Lane, folks.           MM