I can report that in one case that I can verify the egg came before the chicken even arrived…  Let me explain.  (This will take a while.)

As reported previously, I have been having a problem with crows pinching my eggs–the chickens’ eggs, actually.  Anyway, it has been a struggle to find a way to outsmart these thieving birds. Closing the chooks in the hen house seemed unfair to the chooks, given that they were only doing their job, laying eggs.  So that solution only lasted one day.  After that, it was down to timing. Being first on the scene when an egg is laid.  That approach mostly resulted in my sharing the eggs with the crows.  Sometimes I would win–sometimes not.  Let me add that it was never the case that I needed the eggs.  It was the principle of the thing.

On Saturday I happened to notice a crow sniffing around the hen house.  He was looking in the open door, but then turned and walked away.  I figured either there was no egg, or a hen was on the nest.  I, of course, went out onto the balcony and flapped my arms and shouted at the crow, who obligingly took to a treetop to wait.  And laugh.  The damn crow was laughing at me!  Wark, Wark, Waaaarkr.  That did it!  I went straight out to the hen house and took up a position next to the door to wait for the hen to finish laying her googie.  The rest of the chooks, hoping I was going to feed them again, loitered with me.  They eventually got bored with my conversation and wandered off.  I, too, got fed up with standing around while Miss Hen continued taking her time.  After about fifteen minutes of this, I started clearing off the path to the henhouse.  Chickens love to scratch mulch, or anything else, from one place to another, so the path was totally covered. That was a useful way to spend the next twenty minutes, but I finally finished that job before Henny Penny finished her’s.  So I did a few other outdoor jobs, keeping an eye out for Herself.  She eventually completed her task, and I retrieved the prize.

Now, the point of all that was, I had no intention of continuing this asinine contest with a rotten crow.  So I came up with brilliant plan.  It was brilliant because so far it is working.  I know that at some point the crow will figure it out–he’s cleverer than I am–but until then, the chooks get to do the free range thing and I get to collect all the eggs.  Trusting my girls to find their way back into the hen house through the little door that opens into the long corridor that goes into the large enclosure (all of which is covered in chicken wire), I closed the big door that the crow (and I) use to go inside, and left the wire door of the enclosure open so the chooks could get in that way.  So far the crow hasn’t figured it out.  He will, but until then life is good.

All of that is necessary backstory to the “which came first” thing.  What happened was this: On the first day of this new arrangement, one of the Supremes (I can’t tell the three black hens apart, so they are collectively called The Supremes) was making her way through the corridor from the big enclosure to the hen house to lay her egg.  But she left it too late, and didn’t get there in time.  The egg came first.  Ba Boom! 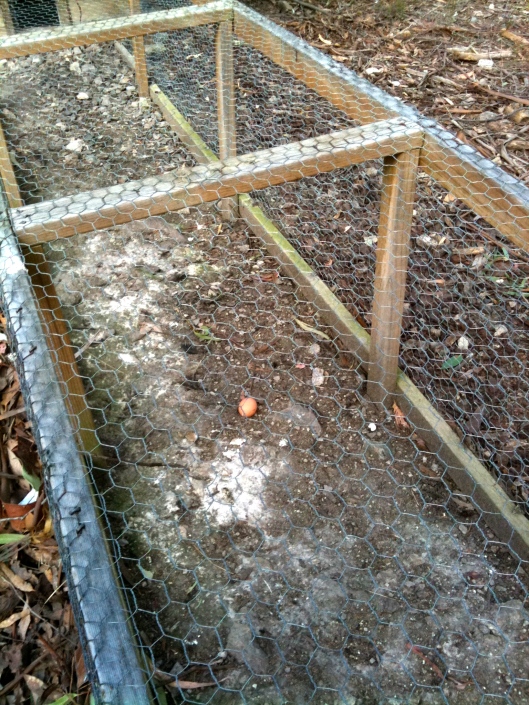 The egg came before the chicken . . . got there

So now you know.  BTW:  I did finally retrieve the egg by finding a very long stick (of which I have an abundance) and used it to gently nudge the egg to the little door (visible top left), so I could go inside and reach through and grab the egg.  Now I’m thinking I should have left the egg there.  What fun it would have been to watch that damn crow go crazy trying to figure out how to get to it.            MM

10 thoughts on “Which DID Come First– The Chicken or the Egg?”