Forrest Gump was right, you know.  Life is like a box of chocolates, and I’ll be dipped if I’m not getting one caramel after another.  I’m chewing as fast as I can, but every now and then I run into a bunch  of nuts.  I like nuts, so I really don’t mind. They add texture to my box of chocolates.

Okay, I’m through with that little metaphor.  It wasn’t going anywhere anyway.  Instead, I’d like to talk about real estate.  Well, that isn’t quite true– I’d actually  like to forget about it altogether.  You may recall that I took the big plunge, back in November, and put my house on the market.  It was rather exciting.  Fun, even.   Some of you–anyone who has ever bought or sold a house–will not be particularly surprised when I say that the charm of the adventure has waned.  Frankly, I’m over it.  Unfortunately, however, IT isn’t over.  In fact, it really has only just begun. Again.

I decided shortly before I went overseas in late January that I wouldn’t renew the agent’s contract.   Nothing much had happened over the Christmas holidays, nor in the period immediately following as there were some nasty bush fires in this part of Tassie.  I think it’s a safe bet that a house surrounded on all sides by natural bush is not going to be a hot favourite during bush fire season, so I pulled the plug on advertising before heading off to the Caribbean.

So the house hasn’t been actively on the market since around Christmastime.  Now I’m ready to go again.  This time with a few improvements, mostly outside.  When I decided to lose the real estate agent, a friend, experienced in both real estate and commercial renovations, agreed to guide me through the business of selling the house myself.
(Just you stop with the eye roll! I can do it…). Anyway, he also undertook to do some work on the place while I was away for three weeks.  Spruce it up, you might say.  Well, I’d be most interested to know what you might say to some of these little sprucings.

It’s only fair to add that there also was a great deal of very good work done, but none of that required the use of a paint brush.  There is a school of thought here that something a bit quirky would make the place “pop.”  It seems that I’m nothing if not quirky, so perhaps this is a suitable idea.  We’ll see.

The culvert and my mailbox at the entrance to the property 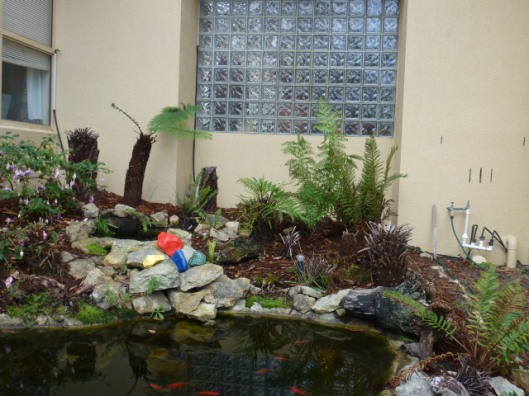 Painted rocks in the fernery.  They didn’t come from the Painted Desert.

Everyone needs a yellow anvil.  Don’t they? 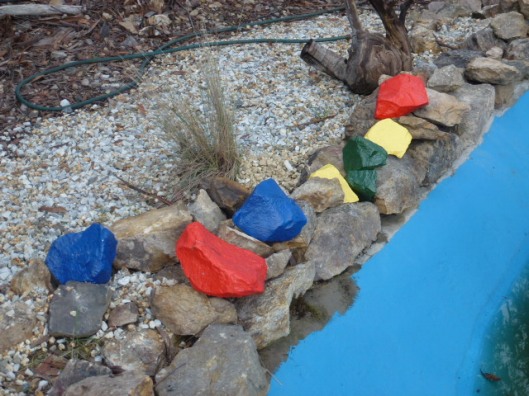 Rocks out by the front pond

Abalone shells in the courtyard

Then there’s the wheelbarrow, and the rubbish bin 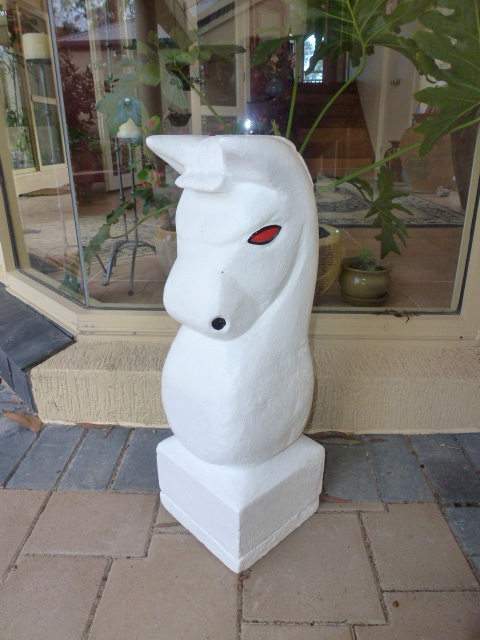 And my “relic” (as described by my 7 year old grandson) — supposed to be a chess piece for the coudrtyard chess board. Now white, with devil eyes

I’m not sure how the gumboots got missed, but I’m assured they will be painted in due course.