My penmanship is so bad that if I’d been born before typewriters I could never have become a writer.  I’ve always had rotten penmanship.  So do my kids, so I’m guessing it’s genetic.  I hate to have to write little note in cards, or–worse–send thank-you notes.  I’ve always understood that they should be hand-written, but if I hand write them it is a risk that the recipient will be insulted as a result of mis-reading what I’ve written.  “Thank you for a lovely time”  is just as likely to be read as “Think you are a lousy friend.”   You get my drift. 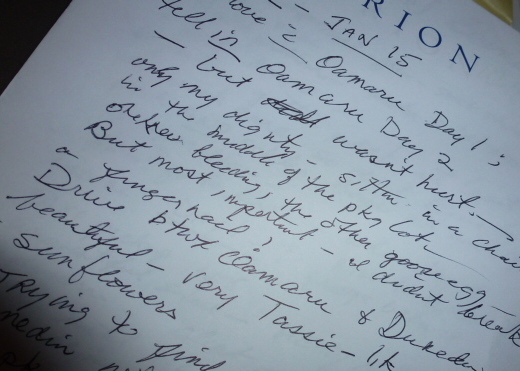 But — Hallelujah! — Thanks to the Washington state legislature, I no longer have lousy penmanship!  What I now have is rotten handwriting.  What’s the difference?  I hear you ask.  I don’t know, I have to answer, except that it means my shame is no longer gender-biased.  That’s a relief, in a way.  It has always seemed to me that-fepeople generally have nicer handwriting than males.  That’s just MY gender bias. But these days it isn’t such a big issue for me, except on the very rare occasion when I have to write a cheque, which inevitably has a mistake that has to be scribbled out and initialed.  Even then you can’t tell the scribbled bit from the rest.  And, frankly, I’m tired of people telling me “You should have been a doctor.”  hahabloodyha

What brought this to mind was a news article reporting that Washington state has now “scrubbed gender bias” from nearly 3,500 state code sections, out of about 40,000.  This amazing project has been a six-year effort to rewrite state laws using gender-neutral vocabulary.  A ‘freshman’ for example, is now referred to as a ‘first year student.’

Apparently Florida, North Carolina and Illinois have already been through that exercise.  A number of states have passed similar constitutional mandates, while others are currently considering gender-neutral legislation.  I’m a bit surprised to read about it, recalling the hoohah in the 1970s about this very thing.  It was a crazy time (hence the ugly architecture, I suppose) when people were trying focus on anything but what mattered. Maybe that’s what’s happening now.

I recall that whenever I was addressed as “Madam Chairperson” — always tongue in cheek — I would always respond ” I prefer “‘Your Highness,’ thank you.”  Can anybody  remember who it was that pointed out that we couldn’t just replace ‘man’ with ‘person’ at the end of words ending in ‘man,’ as person itself was gender-biased, ending in ‘son,’ which is a male term.  So it was suggested that words ending in man or son be changed to end with “offspring.”  So ‘person’ became ‘peroffspring,’ hence chairman became ‘chairperoffspring.’  And so on…