I’m so excited!  I’ve just bought a new painting.  Those of you who are of an Australian Persuasion will recognize immediately from the title that the painting is by artist Pro Hart.  I’ll get to the significance of that title in a moment.  First, let me just say that Pro Hart was a highly-regarded and much-loved Australian artist.  He died about seven years ago at age 77.  His work captured the Australian soul in a way few others have managed.  Often whimsical, at times slap-dash, and sometimes  documentary, his paintings are always engaging.  My new painting is an early Hart, depicting an historical theme. 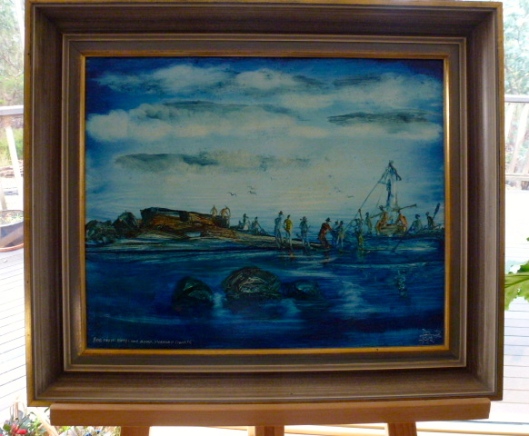 The picture is dated 1978, following Hart’s visit to Tasmania.  The painting is featured in a book entitled Pro Hart’s Legendary Tasmania, with text by Paul White.  The thirty or so paintings in the book were inspired by the “extraordinary and gruesome stories” about Tasmania’s early days which Hart had heard when visiting Tasmania.  While these stories, and hence the paintings, were based on fact and are mostly accurate in detail, they have probably been ‘improved’ over the past 150 years with each telling.  They nevertheless reflect the legends, and indeed the history, of this island, known then as Van Diemen’s Land.

For a glance at the range and variety of Hart’s work, check out the following site featuring a sample of his work.

Now, about that title… for a look at Pro Hart’s humor, check out the following youtube video of one of Australia’s favorite, and most famous commercials:
the 1997 StainMaster Carpet Ad.

There isn’t a lot more I can say, except YeeHaw!  I’m delighted with my new painting and I can’t wait to hang it in the Meander Gallery, which will be a part of my new home. Once I have one…      MM

6 thoughts on “There’s No Spaghetti on This Girl’s Carpet!”