Washington Pigs Get the Munchies

Did Your Last Pork Ribs Tickle Your Fancy a Little More Than Usual?
Did you and your friends ham it up a bit after dinner?  Do you get the giggles when you think about your breakfast bacon?  Perhaps not yet, but just listen to this.  In Washington state, the excess stems, roots and leaves of marijuana plants are being turned into pig food! Well, it’s currently being trialled, anyway.  And it seems the appetite-enhancing effects of the marijuana plants are working wonders on the study  pigs.  Four pigs who spent the last four months of their lives eating weed waste wound up 20 to 30 pounds heavier than their six litter-mates at slaughter.

I’m sure there’s a cautionary tale in there somewhere, but I’m prepared to wait and see.  I reckon it’ll be quite a while before your Sunday Pot Roast is pork.

Hold on!  I’m as fond of alliteration as the next person, but not when it comes to a menu — at least not a menu which features entomophagy — that is, the (intentional) ingestion of insects.  I’ve written about this before.  I acknowledge that two thirds of the people in the world eat bugs (by choice), and that insects are an important source of protein and other nutritional elements.  I recognize the value of edible insects, the eating of which is an excellent idea, and one that will no doubt spread as food sustainability becomes an even larger issue.  In fact, I can’t say anything negative about the (intentional) eating of insects. Except “Yuck.”  Dana Feldman reported recently in Reuters on the Third Annual Bug-A-Thon at Ripley’s Believe It or Not! Hollywood. . . a function showcasing insects as a sustainable food.

How’s this for a nice starter? 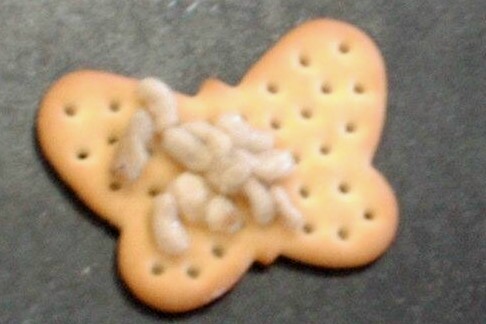 Then perhaps a nice stirfry with some silkworm pupae…

I know I’m a wuss, but I can’t imagine myself getting hungry for this:

According to Bug Chef David George Gordon, to prepare Tempura Tarantula the spiders are first frozen, then defrosted, and the abdomen is cut off and the hairy bits singed with a lighter.  The remaining spider body is then dunked into batter and fried.  “You just have to brown it up for a couple of minutes.  Then I add my secret ingredient, a pinch of smoked paprika for flavor.  The best part are the legs.”

It was said by one intrepid taster to taste like shrimp tempura.  Nevertheless, I won’t be having what she’s having.             MM