Aah, what can be nicer than waking (before dawn) to the sound of an adolescent rooster yodelling…?  Yes, I once again have some chooks.  Quite a few, in fact.  I can’t really claim them as mine, exactly — they just live here at the Bakehouse, and I share responsibility for their livelihood.  They belong to O. (As in Orlando) one of the Three Geeks, who has taken up parttime residence in one of the B&B units.  He transferred the chooks to here so that I could look after them when he’s not around.

There are seventeen of them, but they are small.  In fact, some are really small. As near as I can tell, they are all bantams, of varying ages.  So far only one has formally announced his malehood.  I suspect a couple others, but they’re still too young to care.  It’s a motley group, but in the nicest possible way.  Some — maybe most — are silkies, I think.  Or some other breed that features a ridiculous topknot.  Pretty much all of the chooky colours are represented, in various combination.  It’s going to be fun watching the younger ones mature, just to see what they’ll look like!   Not to mention finding out how many roosters there really are…

The young rooster and some of his harem

With so many, it’s going to be a challenge naming them.  You may recall, the previous bunch I had were all named after singers: Satchmo; Blossom, Dearie; Ella; and the three black hens I couldn’t tell apart, so called them The Supremes.  Anyway, I’ve been contemplating how to name this group.  I’m thinking maybe floral names… like Lily, Daisy, Rosemary…  I don’t want to  rush into naming them too soon, not until I get better acquainted with them.  And certainly not before they declare their gender.  I don’t want another fiasco like my rooster, Ella!  The problem with floral names is they really don’t suit the rooster(s) very well.  But, for now, the one declared cock will simply be called Herb.              MM 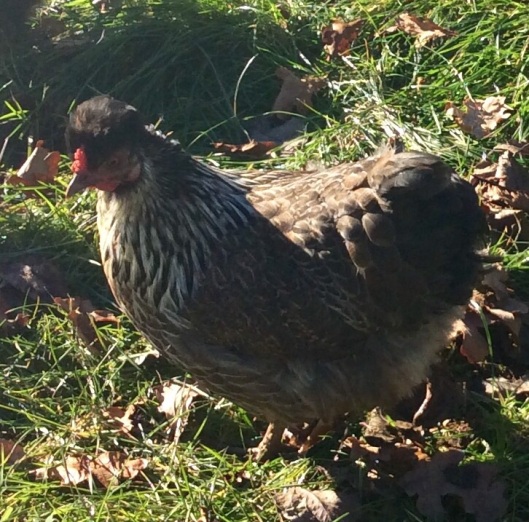 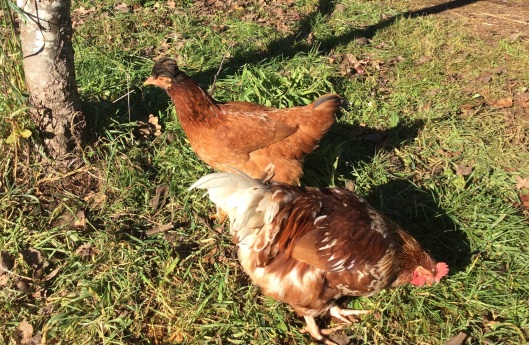 Ginger, maybe?  And, of course, Herb