Hell hath no fury like a Windows Vista user…

I know it is dangerous to become self-satisfied.  I know I’ll get more than a sore arm from patting myself on the back. I know it is unseemly to gloat.  So I intend to tell the story like it was, with no real glory to be attributed to me.  There may be those among you who judge my performance to be laudable; I can certainly understand how you might conclude that. But just remember: that is your opinion, not my own.

I should explain at the outset that this is an article about technology. Those of you who understand such things should scroll down a ways and find one of my older posts to read as this one could annoy you. If, like me, you don’t know the difference between a Gopher Proxy and a Socks Proxy,  this tale might inspire you. Anyone who has a computer knows that all computers are fraught with problems from time to time. It doesn’t really matter how one arrives at the point where I was last week–only that you will have been, or will be there at some time. In my case it started a couple years ago when I bought a laptop.  Nothing wrong with the laptop, per se, but it was set up with Windows Vista operating system.  Otherwise known as Windows Hell.  It was never any good, and I’m sure it has been responsible for millions of tantrums around the globe.  In retrospect, I can’t imagine why I persisted using it for so long. That’s not like me.  But I finally reached the end of my tether last week and decided to replace it with Windows 7.

My son is here in Hobart at the moment, so I thought it would be a good time to make the change (in case I had any ‘issues’ with it). He is one of those people I advised to scroll down to an earlier article so as not to be annoyed by this one.  In other words, he is trained in computer technology. I’ve installed many programs in the past and chose to install the new Windows 7 myself. Nowadays the process is so easy that even a grown-up can do it.  Except in this case.  In one last burst of demonic mischief, Windows Hell would not let go and would not let Windows 7 into my computer.  It was nothing I did.  The two programs could not even co-habitate long enough for me to install the new system.  The whole business just curled up its toes and refused to do anything, or allow anything to be done.  My laptop was rendered completely useless.  I’d backed up everything on a memory stick, so wasn’t too concerned about losing stuff, but I was pretty pissed off at spending quite a few dollars on Windows 7 for nothing.  And I didn’t much like to think the laptop itself was the problem.  I was certain that Windows Hell had to be the culprit.  Adam weighed in to help recover the computer, and both he and I spent many hours trying all sorts of things to cajole it back to life.  Adam periodically mentioned to me that it was likely a hardware problem (or, in this case, a hardwear problem;  I’ve banged out many hundreds of thousands of words in the time I’ve had it).  He pointed out that one of the first lessons one learns in ‘computer school’ is that the amount of time it takes to track down a software problem generally makes it non-commercial to do.  It would wind up costing more to find and fix it than the computer is worth.  So we wrote it off as an exhausted laptop and prepared to go shopping.

I don’t intend to discuss the pros and cons of PCs vs Macs.  Others have already done it soooo cleverly… (click here and see what I mean),  but suffice to say, I had already made up my mind (during one of the Windows Hell tanties) that my next computer would be a Mac. I just didn’t think it would be any time soon.  Now, suddenly, I faced the scary prospect that the future was now!  Adam explained the various types of Macs available, from the iMac down to the various smaller options, including the iPad, the Air (?) and so on.  Off to the Apple store we went. I checked them all out and decided that I would wait until closer to my next trip to buy a portable version–wait and see what’s out there in six months, I thought.  So I came home with a wonderful new 27″ iMac.  I’ve said it before, and I’m gonna have to say it again, size does matter.  WOW!  Not just the huge screen, but the tiny little keyboard and the slick little mouse…  No cables, no mess. It all looks and feels so elegant.  BTW, when I say tiny little keyboard I should clarify that it is a full size keyboard without any extra stuff, so it is only 5″ by 11″   Tiny.

“So what’s the big deal?” I hear you ask.  “Heaps of us have been using Macs for years.”  Well, that’s not the actual point of my story. What happened later is the point.  A couple days later I was relaxing with a cuppa when I noticed the defunct laptop sitting forlornly on the floor next to my chair. Much as I do with my miscreant moggies, I decided to give it One More Chance (however I didn’t count to three  as I do with the cats).  I repeated the same process that Adam and I had gone through many times, with it settling nicely into some sort of mobius loop that involved shutting itself down, booting itself up, offering an opportunity to choose either something-or-other or something-or-other-else if you are faster than the speed of light.  After watching carefully, and concentrating as it worked its way round the loop a few times, I discovered that the two choices were between pressing F1 or F12.   Never did get what the reason, or consequence of either choice might be. Anyway, I pressed one of the keys offered and went to a new screen, which offered me new choices. I selected one of them, which took me to another new screen, and so on.  Each time it was a question of ‘if you want to do something-or-other: press whatsit” or if you want to do something-or-other-else press: whatchamacallit.’  Each time these arcane screens/instructions/options appeared I would play along, but inevitably would wind up back on the mobius track.  This was sort of like a Computer Game for Dummies.  I hadn’t a clue what any of it meant, but that had never stopped me before.  Well, there is no surprise ending to this story.  I eventually got all traces of Windows Hell eradicated, Windows 7 installed, and my little laptop is purring along happily.   And I don’t have the foggiest notion how I did it.         MM 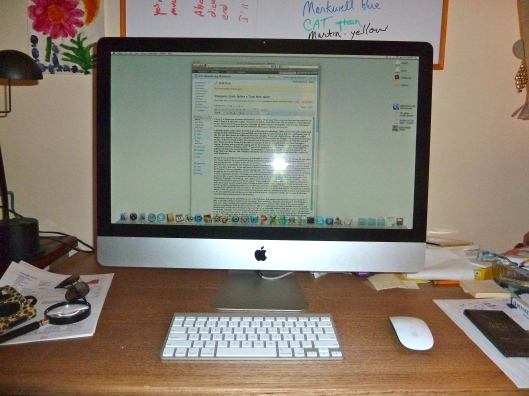 5 thoughts on “Smugness Goeth Before a Total Melt-down”