I’m just gonna sit here and type some random thoughts while I wait for my Burrito Supreme.   Having eaten breakfast at 7 a.m.,  and no lunch, I’m starving.  It’s now 5:30 p.m.   I can see the Legend sailing past now, and I’m no longer on board.  It was an excellent trip in many ways–highly successful, despite a few hiccups.  As much as I hated to see it end, I am now looking forward to getting home to something like a normal carry-on.  It just isn’t natural to be that spoiled.  It is kinda fun for a while, though…

The penalty  for such spoiling, of course, is spending 8,000 hours on airplanes to get there.  From where I live, anyway.  Then, after two weeks of being spoiled rotten, you are suddenly spat off the ship like a watermelon seed, no longer to be cosseted and flattered like an Important Person.  The first sign that you are no longer that IP is when you have to scrabble along with the rest of your fellow watermelon seeds for your luggage, which has been  unceremoniously dumped out onto the dockside.  Then, if you are like me and have packed more than you can reasonably schlepp the 200 or so metres to where the (so-called) taxis await, you find someone who wants do it.  For $5 per bag.  Fair enough, too.

These “taxis” deserve a word or three, if for no other reason than my efforts to get an ordinary van/taxi to take Susan and me–and our considerable mountain of luggage–to my hotel and Susan to the airport nearly erupted in fisticuffs.  It seems the open-air trucks, or buses, ARE the taxis, and those other vehicles with the little signs on top saying “taxi” are NOT for us.  Mild-mannered, agreeable sort that I am, I eventually accepted the woman’s word.  She was a lot bigger than me.

You ordered a taxi, Ma’am? 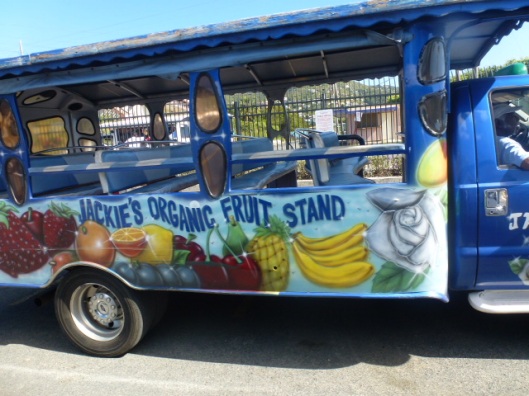 This is a strange place.  Beautiful, but strange.  With a particularly astute sense of timing, a small lizard has just crept past on the windowsill next to me, then took his leave through the open window slat (propped open by a plastic cup).   Lest you think I’m slumming it here, let me just add that this is the Best Western Carib Beach Resort, situated alongside St. Thomas International Airport.  The airport is rather more like a shearing shed than an international airport–at least the arrivals part; I haven’t yet experienced the Departures section.   But for now, here at the Best Western Carib Beach Resort, the margueritas are excellent.  Well, they’re cheap, at least. The burrito supreme, not so much.  But as I’m starving, I don’t care much.

Seabourn gave each departing guest a little plastic folder with various products for our flight home.   Little tubes and bottles of stuff, tiny enough to pass airport security.  One of the items was a little rectangular pkg,–a wee box that was hermetically sealed in plastic, measuring approximately 2 8/9 inches by 43mm by 1.1 cm.   I confess–as soon as I was allowed into my hotel room (at 2 p.m.) I frantically tore at the plastic wrapping until I finally managed to rip it off and liberate the deck of cards within.  Imagine my disappointment when it turned out not to be a sturdy, well-formed and well-wrapped brownie.

Please understand my mental state.  I’d had breakfast at 7 a.m., after a night of very little sleep due to worrying that I wouldn’t wake up in time, then reached the the hotel about 8 a.m. after a hair-raising ride in an open-air “taxi,” then waited in the modest lobby until my room was ready at 2 p.m. (hoping it would be ready any minute now).  I wasn’t at my best.