Heck.  It’s 2:30 a.m. and I’m awake, so I may as well disgorge some of this mental congestion that’s clogging up my sleep gears.  I’ve just returned from the First Annual Carey Women Road Trip.  Me and three nieces:  Mary, Deb, and Joanna.  We had a glorious and uproarious time traveling through Wisconsin.  There’s so much to tell, I don’t know where to begin.  So I’ll start in Iowa; Des Moines,  to be precise.

Many years ago  I was “into” (as we said then) writing limericks.  There were way too many to remember, but one that I do recall is about an ederly gent from Des Moines.  I’ve always been rather proud of that limerick, actually; it’s one of my better ones.  So, as we approached Iowa’s capital city, I announced to my fellow travelers that I had a limerick to share upon our arrival there.  As soon as we reached the city limits we pulled into a petrol station–one of those “eat and get gas” quick stops–and I recited my limerick.  I’ll share it with you now:

An elderly gent from Des Moines
Was constantly wet in the groin.
He sighed with regret
“Though I’m frequently wet,
I don’t know if I’m coming or going.”

As it turned out, the gas station we stopped at was one of a chain  of shops which seem to pop up all around Iowa, called Kum & Go.  A fitting place for my limerick recital, don’t you think? 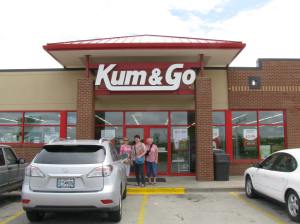 Back to the Road Trip, I should explain a little bit about its purpose.  Apart from the obvious aim of spending time together and having fun, we wanted to do a bit of family research.  My mother was born in Black River Falls, WI, and we wanted to see what we could learn about our family history. More about that later, in another post.  Meanwhile, we also wanted to visit Door County; plus, we thought it would be appropriate to check out some cheese factories.  Then I discovered a great website, The Wisconsin Tourist Attractions and Oddities Index, that listed some really screwy places to visit in Wisconsin.  We had our work cut out; there were plenty of things to do and not much time.

Once in Wisconsin, our first sighting from the Oddities Index was in Platteville. The World’s Largest M was created in 1936 by some engineering students who were attending the University Of Wisconsin-Platteville, which was a mining school at the time.  We didn’t know its history when we saw it, and we couldn’t figure out why there was an M, given that there is no M in either Platteville or Wisconsin.  We concluded it must be because it was on the Belmont Mound.  Obviously, they couldn’t put BM, so they settled for M.  Our theory wasn’t quite accurate, as it happens.  Check out  the Big Letter “M”

On the way to our next site, we hurried through the little town of Mt. Horeb, which is said to be infested with trolls.  Fortunately, we didn’t see any trolls, nor was there any sign of suspicious road kill, so we continued on to our next site.  Our destination was the National Mustard Museum in Middleton.  Well, folks, I’m here to tell you, it was a revelation.  I should point out that, as well as having nearly 5000 different mustards from all around the world, it also is the home of Poupon U, America’s esteemed College of Mustard. 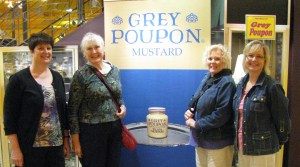 In addition to being an excellent learning experience (Go ahead, ask me a question about mustard.), you’ll be delighted to know that the experts at the National Mustard Museum are not without a sense of humor.  No, indeed.  Along with the serious business of mustard you’ll find a charming collection of cartoons, posters, and displays of all sorts. 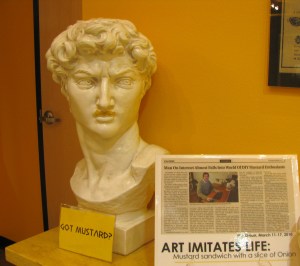 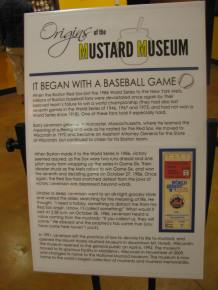 The Origins of the National Mustard Museum, Middleton, WI 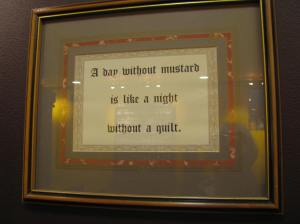 For Quilters Who Can't Cut the Mustard Anymore

Like most colleges and universities, Poupon U has its bookstore and its mascot and its fight songs.   Here is the Poupon U Fight Song, to the tune of On Wisconsin, naturally:

On our hot dogs, on our bratwursts,
Mustard is so cool.
Never mayo, never ketchup, They’re against the rules.
Gleaming gold and mellow yellow, Smooth, rough, sweet and hot.
Fight, Poupon U, we’ll fight
And eat some lunch.

Here’s another little item I discovered  in the Poupon U SongBook:  (Cross my heart.)

Have You Seen The Mustard Man?