I had a very interesting—and enlightening—tour of Saigon’s Art Scene recently.  The tour guide was, among other things, a stock broker.  From the sounds of it, a very successful one.  His knowledge of, or interest in, the art scene was not apparent, however.  Nevermind.  Perhaps he owned the tour company.

It was a great morning, which included a couple excellent galleries featuring the work of a number of local artists, a wander through the government-run Art Museum, a good look at downtown Saigon through a bus window, a provocative lecture (as we rode along) on the Art of (economic) Survival and the Move Toward Capitalism, a really romping ride in a ricksha (between galleries), and a yummy lunch in a noodle bar.  Just another hard day at the office.

The tour got off to a slightly bizarre start when we sort of reached what was to be our first destination, only to find ourselves out in the middle of a vast field where there was nothing except some newly made roads winding here and there amongst the weeds.

I know the gallery is supposed to be around here some place...

It was a huge area, surrounded by grand new housing developments.  Neither the guide nor the driver had any idea how to get to the gallery, so between phone calls we were regaled with more Pearls of Wisdom on economic politics as we drove around for the next half hour.

We did get to the gallery eventually, and it was a delight.  In addition to a variety of different styles of painting, there were some amazing ceramics and some weird and wonderful sculptures.  Including some I wanted to take home.  Those who have been with me for a while know that I have a bit of a reputation when it comes to art galleries.  Let’s just say I’ve been known to succumb to temptation on occasion…  This time I resisted.  For now.  I did photograph a number of items, and I do have the website and email address…   I admit to being particularly drawn to the whimsical pieces. In a few cases I wasn’t sure whether they were whimsical or gruesome.  Or both.  Judge for yourself: 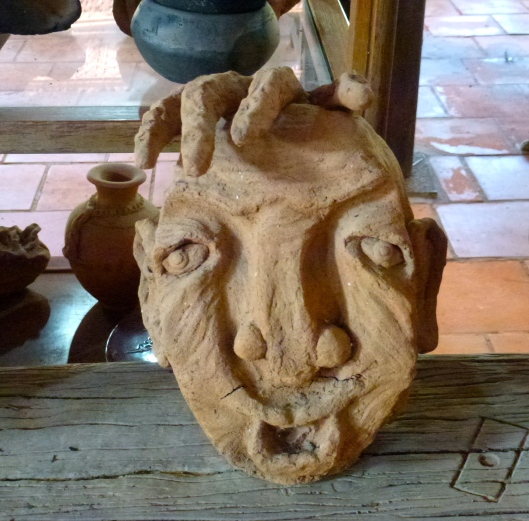 The hand on the head was a frequent theme here. A metaphor for government? I don't know... 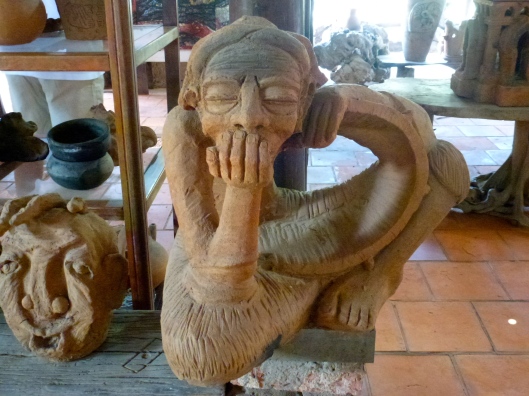 Not surprisingly, the War—which the Vietnamese call ‘the American War’—figures prominently in the art of Viet Nam. This was especially true in the Government-run Museum of Art.  Some of it was very confronting; I didn’t linger.  There was a smattering of impressionist-influenced work, and some more modern work as well.  The artists of Viet Nam are obviously well-trained in many styles, but I couldn’t say I was able to identify a ‘Vietnamese style.’  I think the lack of a guide to explain things, and my own lack of knowledge let me down.  Perhaps I should be writing about the economic politics of moving from Communism to Capitalism, which I did have an enthusiastic guide for.  By the way, did you know that if Singapore were to stop changing/progressing now, and stay right where it is, it would take Saigon ninety-seven years to catch up to where Singapore is now.  Isn’t that amazing? How do you suppose he figured that out?

Yes, there were some traditional paintings as well

Tomorrow I’m off to the Chinese Cuisine Training Institute to do a short course in Chinese cooking.  It starts out at the ‘wet market,’ then moves to the Institute for a demonstration by a Master Chef, followed by a chance to do some ‘hands-on’ cooking.  Should be a great day—stay tuned!           MM

15 thoughts on “The Art of Survival”